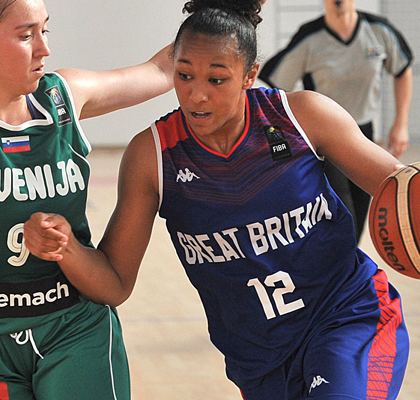 Slovenia underlined their status as one of the favourites for promotion at the FIBA U20 Women’s European Championship Division B 2016 in Podgorica as they sailed to a 69-50 triumph against Great Britain.

While GB headed into the contest in confident mood after their resounding win earlier in the week against Israel, the quality of Slovenia showed as the same players who finished fifth in Division A at U18 level last summer, took the opportunity to showcase their talent.

GB were always on the back foot after Slovenia marched into an early 18-11 lead, with Annamarie Prezelj reiterating why she is one of the best players of her generation in Europe by eventually netting an impressive 24 points for her team.

Still trailing 38-24 heading to the locker rooms, some defensive adjustments helped GB to slow down Slovenia during the third quarter. Then helped by some scores from Savannah Wilkinson, GB were still in contention heading into the last ten minutes.

However, Larisa Ocvirk was proving too-hot-to handle and she joined Preselj with a mammoth contribution of 24 points and 14 rebounds, as Slovenia eased their way to victory.

GB can take strength from having had ten different scoring contributors, but they just couldn’t find anyone to come up with the big score as Wilkinson and Kennedy Leonard shared 18 points.

Jose Maria ‘Chema’ Buceta and his players will look to respond when they play Montenegro tomorrownight in a 7.15pm tip-off.