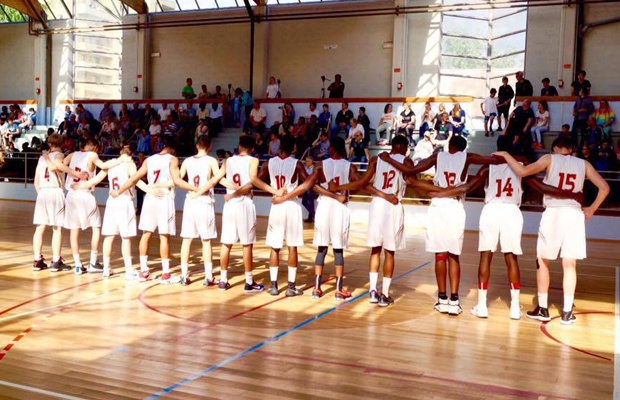 England Under-16s finished 3-0 in their most recent preparation series against France Under-15s, taking the final game 55-71 on Sunday evening.

Kareem Queeley stepped up with 15 points to lead England, backed up by Daniel Ogoro with 11, and 8 a-piece from Jacob Round and Arinze Emeka-Anyakwo. Richard Amaefule finished with 7, while Mate Okros added 6.

Despite only holding a 5 point lead after the opening period, a dominant 23-10 second period saw their lead extend to 18 points at half time, off the back of 26 fast break points.

France pushed back in the second half, winning the third period by two, and tying up the final quarter, but England had already done enough damage to not give up their lead.

“As this is our third game of the three we shifted the emphasis and success criteria from building the process to winning,” said England Head Coach Alan Keane.

“We had a very competitive practice this morning and the message was clear that each player needs to earn his game minutes in practice. Offensively things are coming together. We are playing with good spacing and ball movement and creating good shots, however, today we didn’t shoot the ball as well.

“Once again we built a 20 point lead but lapses in concentration in the third and the start of the fourth allowed France to reduce the gap to 10 points at one stage. We are so close to getting it right for longer stretches of the game and taking steps forward each day.

“These 3 games have been instrumental in identifying key areas for immediate attention. We will continue to review our performance this weekend, continue to heighten the self awareness of every player and their abilities in this moment and go back to camp on Friday with a clear picture on what we need to improve as individuals and as a team. In addition, I would like to mention that our coaching staff have delivered a first class job these 4 days in particular our S & C coach Paddy Waplington who went above and beyond to be with us for this tournament.”