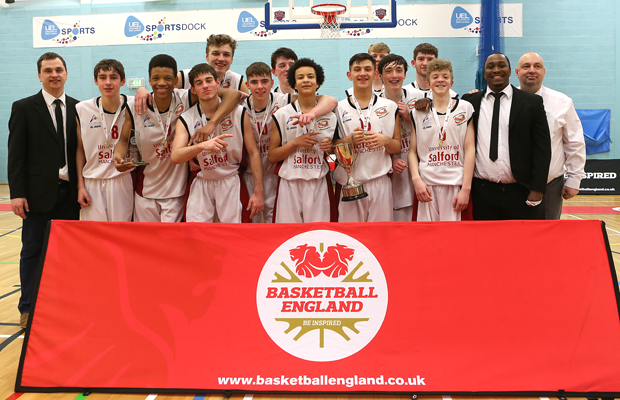 Michael Anumba produced a memorable display to help lead Manchester Magic to victory in the Under-16 Boys National Cup as they defeated Peckham Pride 81-57.

The Magic starlet put up impressive numbers to take MVP honours, finishing with all 20 of his points in the first half, along with 10 boards, four assists and a stunning seven steals (six of which came in the first half).

“I think we played really well as a team,” Anumba said afterwards. “We moved the ball very well, and we won the game through our defence; we stuck together and played very good defence against a very good team.”

“I think we started very well, especially the first two quarters,” added Magic Head Coach Aurimas Verbukas. “I think we showed up to play the game. All 12 kids really contributed today. It wasn’t an easy game, it’s never easy playing against a Peckham team for 40 minutes, but our guys played how we normally play, high intensity, and that’s all we can ask from them.

“It feels good (to win), especially for the kids. I said it before the Cup Final, it’s always for the kids. We coaches do our jobs in practice and the kids just play the game.”

After trailing 15-16 late in the first, Manchester put together a pivotal 18-2 run across quarters as they established control to lead 33-18.

Back-to-back triples from Roberts took the lead beyond 20 points with Magic going into the half-time break with a comfortable 45-23 cushion.

Peckham rallied with a 13-0 run, and they were led by Demilade Adenuga’s double-double of 14 points and 13 rebounds. Lanipekun added 13 points, while Tavera finished with 11.