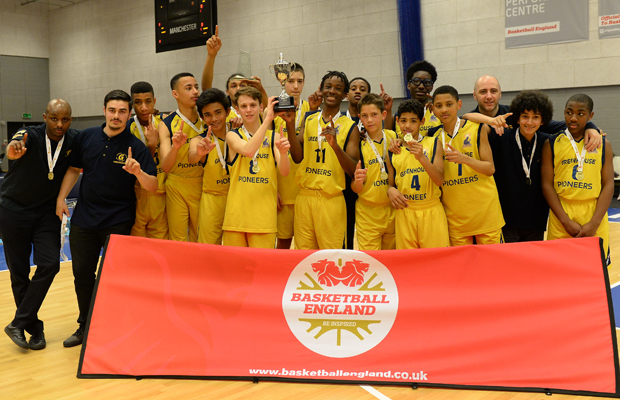 London Greenhouse Pioneers won the Under-14 National Championship with a 77-57 win over London Lewisham Thunder on Sunday at the National Basketball Performance Centre in Manchester.

Daijaun Antonio impressed with 27 points, 12 rebounds, 3 assists, 3 steals and 4 blocks on 11/16 shooting on his way to MVP honours, as Greenhouse got hold of the contest three minutes in and led the rest of the way.

Luca Allick-Smith had 9 points and 12 rebounds for Greenhouse, who saw every player get at least 8 minutes.

“It has been a very good season for all the kids, we faced challenges and we worked together to find solutions,” Pioneers Head Coach Lucio Semedo said.

“I was blessed to have a group of talented, hardworking and committed young men. Credit definitely has to be given to supportive parents, Greenhouse Sports, the Pioneers basketball club and both my assistant coaches David Cavaca & Davide Caschili. They were all key to the success of our season.

“The boys fully committed and believed in the Pioneers style of play, consistently demonstrating this throughout the season. It feels great to have won it all, the boys have earned every win, through practicing and preparation.

“It has been a joy to see a bunch of individuals become a team, sharing the common goal with focus on process, listening, sharing and learning. I’m so proud and happy for the team and looking forward to a new journey!”

The game was back and forth throughout which did nothing but amp up the passionate supporters that filled the Amaechi Centre. In the end it was the London side that won out, leaving the Giants to wonder what might have been.

The Giants were already up against it as one of their players went down with a serious knee injury during warm ups that delayed proceedings at the Amaechi Centre, and once the ball was thrown up Greenhouse proved too strong.