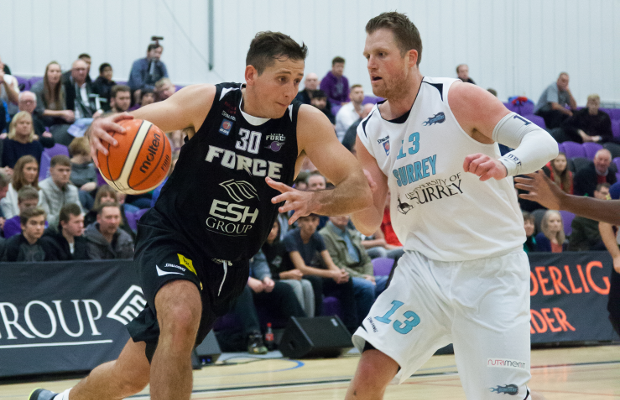 Leeds Force reached the BBL Playoffs for the first time after beating Surrey Scorchers 72-68 on the last day of the regular season, on Sunday.

Matt Newby’s side went into the final weekend of the 2015-16 league campaign knowing they could make the post-season with a double-winning weekend.

An incredible year with some extraordinary experiences and incredible lessons. We advance to the post season still willing to learn.

Force started with a 92-77 victory at home to Manchester Giants on Friday night, before securing their spot with a 72-68 success in Guildford two days later. Marek Klassen was instrumental over the weekend and has proved to be a great mid-season acquisition having led the charge to the post-season.

Klassen netted a season-high 34 points in the win against Manchester after shooting 6-of-10 from 3-point range, whilst also dishing out 10 assists. Five other players reached double figures as Force pulled away in the second half to move within one win of the playoffs.

On Sunday, Force looked to be cruising against the Scorchers as they led by 12 points heading into the final quarter. However, Surrey came storming back to take the lead on a 15-2 start to the fourth, and the game was later tied at 68 inside the final minute.

Up stepped Klassen with a crucial score for the visitors, and after Surrey failed to answer, Kwan Waller was able to ice the win with a pair of free throws to cue jubilant celebrations. Klassen filled the stat-sheet with 19 points, seven rebounds, eight assists and five steals in another inspired display.

Force captain Armand Anebo didn’t miss a shot from inside the arc in his 12-point display and there were several important contributions during their triumphant run-in.

Despite being outside the top eight for the majority of the season, particularly in the closing weeks, Force produced a strong finish with four consecutive victories to secure 8th place.

11 of Leeds’ 14 wins in the league this season came at home, including seven of their last eight at the Carnegie Sports Centre.

Their biggest triumph was recorded earlier this month when they defeated Leicester Riders 81-78 in what turned out to be a key result, and almost proved fatal in the Riders’ title hopes. And, Force will have the opportunity to repeat that success as the two teams go head-to-head in the first round of the Playoffs.

Last year, Andreas Kapoulas inspired Bristol Flyers to reach the post-season in their maiden season in the BBL, earning the Coach of the Year plaudits in the process and this time around, Newby will be a strong contender for the accolade after guiding his side to a big achievement for the club.

Elsewhere in the BBL, Leicester handed out several debuts to Loughborough/Charnwood student players as they went down 72-63 against London Lions, while Newcastle Eagles were beaten 105-84 by first round Playoffs opponents Cheshire Phoenix as Kinu Rochford netted 40 points.

Glasgow Rocks defeated Worcester Wolves 80-69 in another dress rehearsal for the playoffs, while Plymouth Raiders used an 11-0 close to beat Sheffield Sharks with Daryl Corletto scoring 25 points as his side miss out on the post-season. Also, Manchester Giants claimed a 78-60 success over Bristol Flyers to avoid finishing bottom of the table.