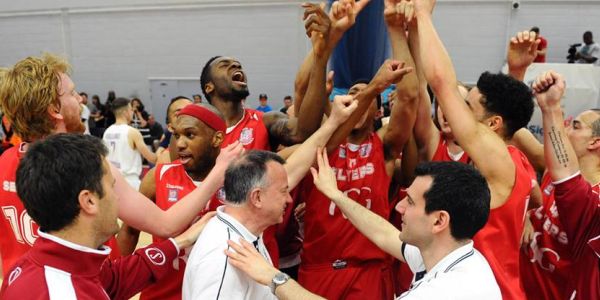 Bristol Flyers secured their place in the playoffs in their first season in the BBL after a 79-54 win over Leeds Force guaranteed them eighth position.

Andreas Kapoulas – Flyers Head Coach and GB under-20 assistant – knew his side had their fate in their own hands following Manchester Giants’ loss to Sheffield Sharks on Friday night, and was delighted they were able to get the job done.

“It’s a wonderful feeling to achieve this,” he told Flyers TV. “I’m really proud of the players, and the support we have had has been unbelievable.

“This is just the start of life in the BBL. We have high aspirations, and it’s only going to get better.”

As a result of clinching their playoff berth, the Flyers will take on league champions Newcastle Eagles in the quarter-finals. And Kapoulas claims they will approach the game like any other as they prepare to be the team to stop the clean sweep.

“Preparation will be the same routine,” said Kapoulas. “Nothing changes really but we are playing in the playoffs in our first year, and everyone is going to be really excited about that.

“Newcastle are going to be a very tough opponent,” he added. “Credit to them, they won the league and did it convincingly, but it’s a two-leg game and we are really looking forward to it.”

Bristol made an instant impression in the BBL after winning their season-opener against Plymouth Raiders. American Doug Herring was a key contributor to their early success, before he was ruled out for the remainder of the campaign after suffering a knee injury.

The Flyers started 2015 with just one win in eight, before boosting their hopes of a top-8 finish with a run of four straight victories. Six successive defeats followed and a seventh would have allowed Manchester to steal the final playoff spot on the final day.

However, Bryquis Perine – replacement for Herring – led the Flyers to a rampant victory in front of a sellout crowd at the SGS Wise Arena with 29 points in 28 minutes.

“The last few weeks had been really tough for us,” admitted Perine. “But we came together and got it done with all the hard work paying off.”

19-year-old Dwayne Lautier-Ogunleye produced a number of telling performances in his role as sixth man, while experienced captain Greg Streete led from the front and back-up guard Roy Owen also grew in his role throughout the season.

Bristol become the first team since Everton Tigers (2007-08) to reach the playoffs in their first season in the BBL.