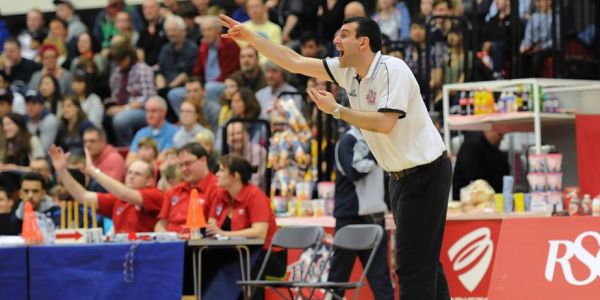 Bristol Flyers Head Coach Andreas Kapoulas has been named as the Molten BBL Coach of the Year for the 2014-15 season, as part of the British Journalist Association (BJA) annual awards.

The GB under-20 assistant led his side to the playoffs in their first season in the top-flight and edged out Newcastle’s player-coach Fab Florurnoy to win the award – voted by BJA members.

“This has been an historic moment for the club to come eighth in our first year,” Kapoulas said. “It has made a really positive impact and been great for the players, the city and basketball here.

“It’s been a year of discovery but the award is recognition for what we’ve done over the past ten years to get here, as well as for the hard work put in by my assistants and – most of all – my players. This was the start but now the objective is to push on.”

Elsewhere, Charles Smith claims the Player of the Year honour in the annual BJA awards after the 39-year-old produced a stellar season in the BBL to help his side on course for another clean sweep. Cheshire Phoenix forward Demond Watt came second in the voting after a dominant first season in the BBL, while Smith’s team-mate Rahmon Fletcher was third.

“Winning Player of the Year is something I never thought, of especially at this stage of my career,” said Smith. “Whilst I’m more concerned with my team winning then individual success, but it’s an honour to have my hard work and dedication acknowledged.

“This season has been a very special one for me, not only because we have won trophies but also the way we have come together as a team through everything that has been thrown at us and we are now one win away from our goal. It’s been a great honour to lead this group of guys and it’s a season I will never forget.”

Eagles forward Darius Defoe has been recognised for his tireless efforts by receiving the Pete Jacques award as the best British BBL player with Kieron Achara and Nick Lewis completing the top three.

Myles Hesson earns the Syd Lipski International award for best Brit overseas after going from strength to strength in his time in Germany with top-flight side Bremerhaven. Fellow GB forward Matthew Bryan-Amaning was second in the voting as he helped Mexican side Soles to the playoffs title, while rising star Luke Nelson was third.