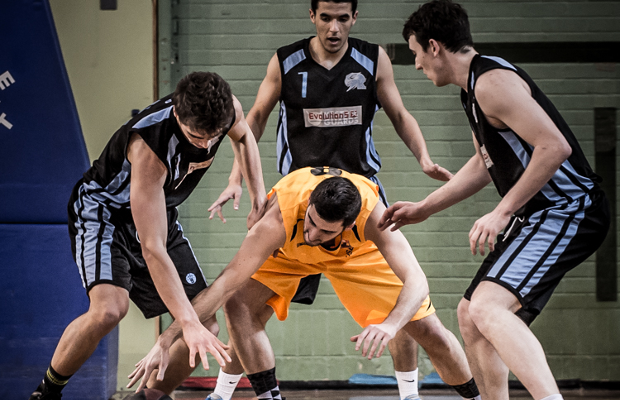 Check out our latest recap of all the NBL action from D1 all the way down to the NBDL as the regular season begins to draw to a close in the lower leagues.

Derby Trailblazers (15-4) missed out on the chance to take the outright lead at the top of D1 after suffering a 74-71 defeat away at Essex Leopards (10-8) – with Matt Shaw’s side now three games behind leaders Manchester Magic (15-1). Will Ashby led the home side to victory with 15 points, five boards, five assists and five steals as the Leopards strengthen their hold on eighth spot.

Team Northumbria (13-4) took advantage with a double-winning weekend and are now two games behind Derby, themselves. Firstly, Marc Steutel’s side came from behind to beat Bradford Dragons (5-14) 82-88 on the road with Lewis Champion top-scoring with 26 points, before the North-East side followed that with a resounding 85-58 win at home to Westminster Warriors (2-17).

Elsewhere, Hemel Storm (13-6) were pushed all the way before eventually seeing off Westminster with Bode Adeluola netting 21 points in the 90-84 victory. London Lituanica (12-7) picked up two wins in the absence of Ausridas Petraitis after earning a 60-73 triumph at Worthing Thunder (6-12), before easing past Kent Crusaders (2-16) 97-60, on Sunday.

James Vear’s Crusaders side had gone into the game on the back of an agonising 81-82 defeat at home to Leicester Warriors (7-10). Theo Rothstein led the way with a 30-point haul for the visitors, while RJ Eytle-Rock had 26 for Kent, although there was to be no repeat heroics of his game-winner against Lituanica a few weeks earlier (see here).

Solent Kestrels (13-3) returned to the top of D2 after claiming a hugely important 78-59 victory against third-placed London Greenhouse Pioneers (12-4). Chris Scarlett top scored with 20 points on 8-of-10 shooting from the field with Elliott Dadds adding 17 points and seven assists in the win. Previous leaders, Loughborough Student Riders (12-3) lost their advantage after suffering a 73-75 defeat at home to Liverpool (8-8) with Daniel Pilkington posting a big double-double with 18 points and 19 boards.

Ipswich (10-7) enjoyed a double-winning weekend at home after beating London Westside (1-13) 79-73, before following that with an 81-77 success against Nottingham Hoods (11-5). Sam Newman dropped 29 points and Caleb Fuller added 19 points in the opening win, while Tom Sadler then netted 31 in Sunday’s victory.

Libor Siczek had 31 in defeat for the Hoods, which followed their 61-46 victory against Brixton Topcats (4-11) behind a 15-point, 14-rebound effort for Miguel Lorenzo Leis. Elsewhere, Derbyshire Arrows (11-6) recorded an 80-45 win at home to Eastside Eagles (1-14) with Joseph Baugh top-scoring with 25 points.

Doncaster Danum Eagles (12-3) lost their third D3 North league game of the season after conceding a 27-20 final quarter in a 79-76 loss away at Derby Trailblazers II. The Eagles had beaten Birmingham Mets 103-78 the previous day with Oliver Hylands netting 27 points in the win. Team Birmingham claimed a 71-67 win at home to City of Sheffield Saints, but would forfeit their road fixture with Myerscough College on Sunday. Also, Newcastle Under Lyme College Knights defeated Mansfield Giants 90-61 behind Kieran Jones’ 36 points, with the Giants bouncing back to beat Leeds Force Academy 75-96 the next day.

Kingston Panthers (2-7) claimed just their second league win of the season as they defeated Derby Trailblazers III (1-10) in the only game in the North-East at the weekend.

In the North-West, University of Chester (13-1) remain at the top after Phil Brandreth’s 35-point haul led his side to a 97-54 victory against Kendal Warriors (2-12), while Preston’s College Titans (13-2) maintained their pursuit with an 85-50 success over Calderdale Explorers (6-8). Also, Manchester Magic II (8-7) recorded an 83-46 win at home to Liverpool II (3-12). Meanwhile, Carlisle Panthers (1-15) have informed BE that they are unable to fulfil their remaining fixtures, and each of their upcoming opponents have been awarded with 20-0 wins.

Sussex Bears (9-1) continue to lead the way in the South after beating Woking Blackhawk Flyers (5-6) 78-63 at the weekend. Thames Valley Cavaliers II (8-2) edged out Southampton University Sharks (4-7) 91-88 to remain second, while Folkestone Saints (4-7) completed the set of home victories with a 73-61 triumph against Kent Crusaders II (6-5).