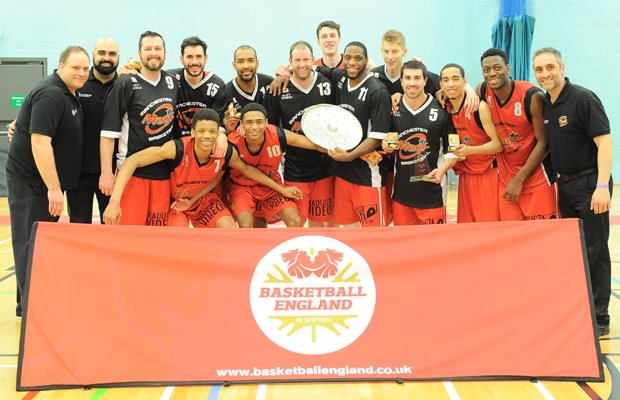 Manchester Magic collected their second piece of silverware of the season after beating Reading Rockets 92-61 to retain their National Trophy title.

Paul Middleton’s side were dominant in the second half as they ran away with victory to complete the Cup-Trophy double-double having also won both competitions last season.

Franc Garcia Garrido was named as the MVP after his 15 points, four rebounds and five assists from the bench, while Ellis Cooper contributed 19 points and 11 boards.

Magic took advantage of a short-handed Reading side, who are no longer with Ben Allison as he is focusing on his career in the City, while point guard Tony Robinson was ruled out in warm ups.

“Obviously I’m happy with the win, it’s a bit disappointing because you want a closer game than that,” Magic Head Coach Paul Middleton said. “They (Reading) are better than that I think, but having said that i thought our guys made things very difficult for them.

“Defensively holding that kind of team to 60 points, I think you’re doing a good job so I think the guys deserve a lot of credit. It’s a big shame the point guard, Robinson, couldn’t play, he obviously makes a difference.

“It was a good team performance, no standout guy that scored 30 points and that’s the way we like it. It happens every now and again with Ellis (Cooper) but when it doesn’t I think we’re a much better team in some ways, because there’s always someone else that can step up and put points on the board and usually it’s quite spread out.”

“It feels really good, the feeling is always so positive, we never get used to that,” Franc said. “I tried to help the team as much as possible from the beginning and thankfully the team worked together well, everyone contributed to the win and I could score a little bit more than usual and I took the MVP instead of Ellis who is always the deserved MVP.”

“Really pleased for Franc,” added Middleton. “He’s been fantastic for a while now but kind of very quietly. You just look at his stat line and he does a bit of everything, we have two point guards that are very good and we’re really pleased Franc got a bit of recognition, to be honest.”

Magic scored the opening nine points of the game, before being pegged back by their opponents, although they would still manage to build a seven-point lead at the end of the first.

They narrowly increased that advantage by half-time after edging a high-scoring second quarter 27-25, but it was in the third where the damage was really done.

Manchester started the second half with a 15-4 run in a clinical spell, and there would be no way back for the Rockets with Kaiyem Cleary eventually scoring the final four points of the game to take the final winning margin past 30 points.

Dave Ajumobi top scored for the Rockets with 18 points, with D’Montre Edwards coming off the bench to add 17.