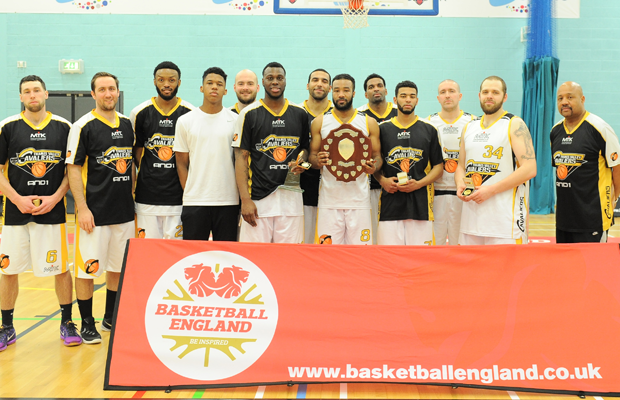 Thames Valley Cavaliers broke clear in the final quarter to secure a 102-84 win over Oxford Brookes University, and claim the National Shield title.

Martelle McLemore picked up the MVP award after finishing with a stunning stat-line of 42 points, 10 rebounds, four assists and nine steals.

“It feels good, our first bit of silverware for the season,” McLemore enthused after the game. “Our goal was obviously to get 4, we missed the Cup, so hopefully we can finish off the season and get the last two.

“We knew we were gonna get Oxford Brookes’ best shot, they’re a very capable team. They hung around but we stuck with our game plan, push them and wear them out, and hopefully in the long run we’ll prevail.”

The former BBL player made a strong start without a single miss to rack up 13 points early on to help TVC into a 24-21 opening quarter lead.

“There’s nobody in the club that works harder than him, it’s well deserved and I couldn’t be prouder of him and how he performed today.”

Oxford took their first lead at the start of the second, setting the tone for a back and forth quarter, until the Cavaliers put together a 12-0 run as they established an 11-point advantage at half-time.

Back-to-back triples helped Oxford cut the gap to seven early in the third, but they could only get as close as five points in the period as their opponents maintained control.

A 15-4 start to the final quarter saw Thames Valley finally break Oxford’s resistance with McLemore bringing up the century and taking his own tally to 42 with little over two minutes to go.

Abodoulaye Sylla kept Oxford in contention throughout, and would end up with 24 points, 17 rebounds, five assists and five blocks.

It was their second runners-up finish in three years in the competition having also lost in the 2014 final against London Lituanica.

“It was a very tough game,” added Banks after the game.

“Oxford Brookes came well prepared, they played extremely well, I give them all the credit in the world for their efforts and I also want to thank my team for an excellent defensive effort and a great result and a great kick off to the events of today.”