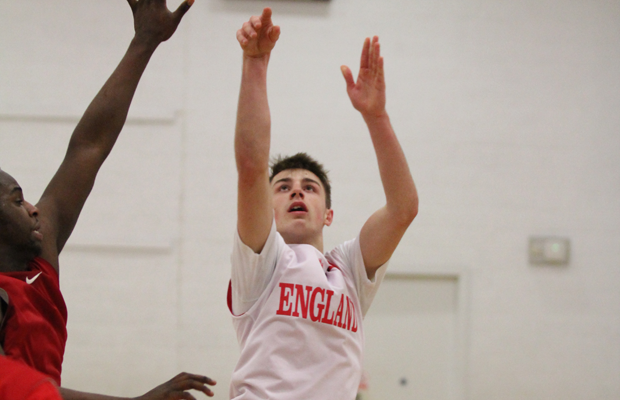 Head Coach Steve Bucknall has selected the England Under-18 squad that will compete at the annual Haris Memorial Tournament from 27-29 December in Manchester.

Following their second training camp at the beginning of this week, Bucknall has chosen fourteen players he would like to get a closer look at during the tournament.

Nottingham’s Luke Mitchell is the only returner from this summer’s European Championship squad in the team, which features a number of year young 1999 born players (Josh Edwards, Jacob Iwowo, Micah-Savery Richards, and Ashley Briggs who were all part of the England Under-16 squad this summer, as well as Zion Tordoff who was one of the final cuts).

Oaklands’ Evan Walshe, one of the top performers in the EABL this season who is competing for Essex Leopards in NBL Division 1, makes the step up from the England Under-17s, along with Sheffield point guard Sam Van Oostrum.

A new addition to the squad is America based Chance Goring, who holds a British passport through his father. Goring, a 6’3″ forward who plays for Notre Dame Prep, is currently ranked number 77 in his position in the Class of 2017 by ESPN.

England will also be boosted by the addition of Sam Japhet-Mathias, a Peckham Pride product who committed to Wake Forest earlier this year. Japhet-Mathias has recently been playing for Kent Crusaders in NBL Division 1.

England Under-18 Squad for Haris Tournament

England will open the tournament on Sunday December 27 at 6pm against Scotland Under-18s, before facing Proctor Academy on Monday at 11am and then Manchester Magic at 4pm to round out the group stages.

Tickets prices are as follows:

Find the full schedule and breakdown of the tournament here.