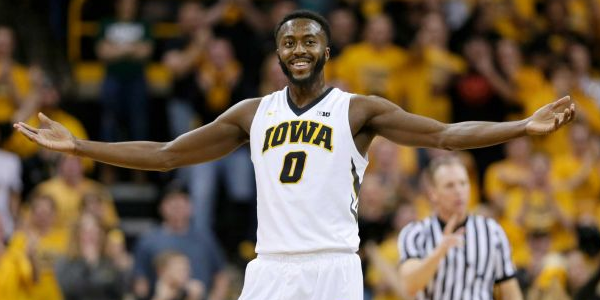 Gabe Olaseni will be suiting up for Miami Heat this summer after being named on their roster for the upcoming NBA Summer Leagues, in Orlando and Vegas.

The London born center finished his college career at Iowa, but was not selected in the recent NBA Draft. Olaseni has signed a free agent deal with Miami, as first reported by Hawk Central, and now has the chance to impress in order to land a spot on an NBA roster for next season.

Olaseni was named as the Big Ten Sixth Man of the Year in his senior year – helping the Hawkeyes reach the NCAA Tournament where they bowed out in the Second Round.

In 34 games, he averaged 8.1 points per game along with 5.4 rebounds and also recorded 54 blocks throughout the season.

Still Great Opportunities Ahead For Me. Excited To Be Playing In The NBA Summer League With The Miami Heat.

The 24-year-old will wear number 34 for Miami as part of their 19-man roster that includes rising star Hassan Whiteside and top-10 draft pick Justise Winslow.

In the build-up to the draft, Olaseni worked out for a number of NBA teams including the Lakers where he went up against Jahlil Okafor, who went on to be selected as the number 3 pick by the Philadelphia 76ers.

Miami may well look to add someone like Olaseni to their roster as back-up to Chris Bosh and Whiteside given that Udonis Haslem, 35, and Chris Andersen, who turns 37 next week, are proving less effective.

Of course, should Olaseni officially sign with Miami then he would join up with compatriot Luol Deng who recently opted to remain with the South Beach franchise for a second season.

The Summer League provides players on the fringes of the NBA the opportunity to impress and push for a place on a 15-man NBA roster come September/October with all teams paying a close eye on proceedings.

There have been other Brits in recent years to have played in the NBA Summer League with Dan Clark, Matthew Bryan-Amaning competing as well as ex-NBA forward Pops Mensah-Bonsu and Portland Trail Blazers’ Joel Freeland, who is expected to return to Europe if he cannot agree a deal to remain in the NBA.

Olaseni was also named in GB Senior Men’s 19-man roster for the upcoming friendly against New Zealand at the Copper Box.

The NBA Summer League action begins on Saturday with Miami set to play at least ten games over the coming weeks in Orlando and Las Vegas.