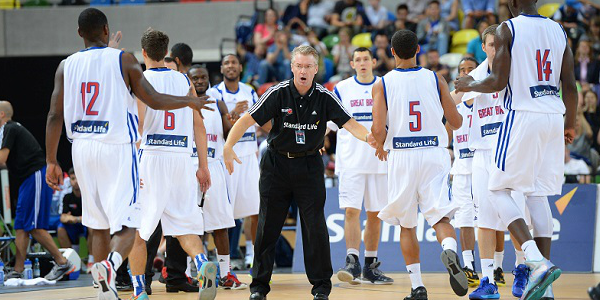 GB have announced a 19-man squad for this summer’s friendly against New Zealand and subsequent tournament in the Netherlands.

Head Coach Joe Prunty has named a number of new faces in the Senior Men set-up including GB U20 guards Jules Dang Akodo and Mo Soluade as well as several players who impressed in college last season.

“We are very excited about the opportunity to have a campaign this summer,” said Prunty. “While it will be short, it will be extremely important for the growth of GB basketball and the continued development of basketball in the UK.

“We are proud of the players who continue to devote their time to represent Great Britain.

“Every summer creates unique professional and personal challenges for the team and each individual player – this year will be no different.

“We are particularly looking forward to the contest at the Copper Box.”

Luol Deng and Joel Freeland are once again not included while the experience of Eric Boateng and Ogo Adegboye is also missing due to injuries.

Next month’s friendly against New Zealand at the Copper Box presents captain Drew Sullivan with the chance to earn his 100th cap, and he will be a late arrival to camp due to prior commitments.

National Teams Director Warwick Cann added: “This summer represents a good opportunity to see some players who have not been seen in camp before at this level, so we have included three players in Teddy Okereafor, Alex Young and Ovie Soko, who weren’t available last year.

“We will welcome twelve new players and we are building a squad with Tokyo 2020 in mind. We are pleased to have a mixture of experience and youth and there are several guys invited who have had good NCAA seasons.

He continued, “There are obviously many other players on our wider list who are currently injured such as Eric Boateng and Ogo Adegboye for example, while we are also in continual communication each year with our NBA players.

“The squad for the Tall Blacks will form the basis of the team that will play at the tournament in the Netherlands, although we will confirm any additions in due course.”

Christian Behrens, a redshirt junior this past season with California Golden Bears, is the only completely new name. The American born forward left Cal recently to pursue professional opportunities, averaging 4.5 points and 3.3 rebounds in 17.1 minutes per game during the 2014-15 season.

The full squad is as follows:

(Some players are no longer at teams listed)*

The players will attend a preparation camp at University of East London on Monday 20 July before the game against the Tall Blacks at the Copper Box on Saturday 25 July at 6pm.

The tournament against Netherlands and Portugal will take place after two days of preparation in Holland starting 12 August.

GB will play the hosts on 14 August and Portugal on 15 August in Leiden, which is 20 miles from Amsterdam.