Five Brits to Represent in NBA Summer League in Vegas 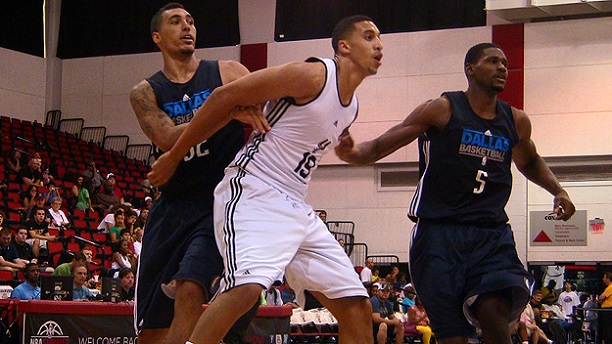 Five British players will represent the UK in the 2013 NBA Summer League in Las Vegas, four of which will be hoping to stake a claim for an invite to training camp with a team as the new season approaches.

Matthew Bryan-Amaning (Chicago Bulls), Ashley Hamilton (Sacramento Kings), Andrew Lawrence (Washington Wizards), and Ryan Richards (San Antonio Spurs) will all be looking to prove their worth, whilst Joel Freeland will compete with the Portland Trailblazers after a rookie season which saw him log limited minutes. All five of them have represented the Great Britain Senior Men’s team at some point or another.

Bryan-Amaning, who went undrafted in 2011 after a success college career with the University of Washington, is coming off his second professional season, with Serbian side KK Radnički Kragujevac, where he averaged 8.2 points and 3.6 rebounds in just 16.7 minutes per game. The 6’9″ athletic forward played summer league last year with the New Orleans Hornets. Source: Bulls roster.

Ashley Hamilton has just finished his Senior year with Loyola Marymount Lions as he’s looking for his first professional contract. The 6’7″ wing has been working out with NBA teams over the past few weeks and been picked up the Kings summer league team after initially expecting to suit up for the Lakers. He averaged 12.9 points, 7.1 rebounds and 1.4 assists in his last year in college. Source: Twitter.

Andrew Lawrence is also fresh out of college, having finished his college career with the College of Charleston. The 6’2″ guard has been at the Wizards mini-camp where he is listed on their summer league roster. Lawrence, part of the 2012 GB Olympic team, averaged 13.5 points, 3 rebounds and 3.7 assists in his senior year with the Cougars, and also received an invite to adidas EUROCAMP in Treviso, where he got good feedback from a number of teams. Source: Wizards Summer League Central.

Ryan Richards will once again be suiting up for the San Antonio Spurs who drafted him with the 49th pick in the 2010 NBA Draft. The 7’0 big man has spent this season split between Polish Euroleague side Asseco Prokom, and Austrian team BC Zepter Vienna, where he won a Championship. In 20 appearances with Vienna, the 1991 born talent finished with averages of 16.7 points and 5.4 rebounds on 48.2% shooting (54.5% inside the arc). Source: Spurs Roster.

Freeland will compete for Portland after a rookie season where he averaged 2.6 points and 2.3 rebounds in 9.4 minutes, making appearances in 51 of Portland’s 82 games, as they didn’t make the playoffs. The 6’10” forward was drafted by Portland in 2006 but remained in Europe, where he became a star, until last season. Freeland will look to continue to make the adjustments required for NBA basketball as he hopes to break into the regular rotation next season (skip to 35s in the video below for his points). Source: Portland Roster.

The NBA Summer League in Las Vegas, which tips off on Friday (12th July), will have a different look this summer. For the first time since the league’s inception in 2004, NBA Summer League will have preliminary games, and then a single-elimination tournament that leads to an actual NBA summer league champion, with the Championship Game being played on July 22.

There will be at least one match-up of Brits, as MBA’s Bulls face Portland on Tuesday July 16th in the preliminary round. See the full schedule here.

Every team is guaranteed to play at least five games.

The NBA Summer League 2013 features 22 teams competing in a 61-game schedule from July 12-22 at the COX Pavilion and Thomas & Mack Center on the campus of the University of Nevada Las Vegas. In addition to a full slate of games on NBA TV, all NBA Summer League games once again will be available via the NBA Summer League Live subscription package on NBA.com and NBA Mobile.

Good luck to all these guys!