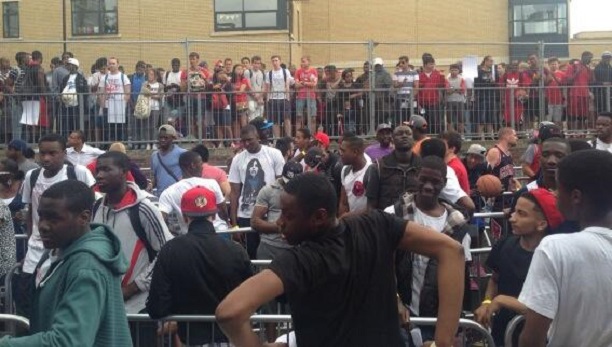 NBA superstar Derrick Rose took over Hackney on Wednesday, as hundreds of fans showed up to meet him and got a chance to win a pair of Derrick Rose 3.5s.

In the midst of a promotional tour around Europe with adidas, Rose spent the morning at Lampton Academy putting the kids through a coaching session before heading to the ‘D Rose Jump Store’ in Hoxton.

The idea was simple – fresh pairs of Rose’s sneakers put up at a height of 10 feet, with fans having to jump up and grab them to take home a pair. Using the hashtag #jumpwithdrose, Twitter was inundated with fans getting hyped about meeting the Chicago Bulls star.

Here is one lucky fan winning his sneaks:


D Rose going out to meet the crowd:

The queues are already building and the excitement is palpable #jumpwithdrose pic.twitter.com/xF7Sfi4ZYk

Derrick Rose wanted to say thanks to everyone in the UK & he had a great time today meeting everyone! #jumpwithdrose pic.twitter.com/McuNUcc1pI

See what people were saying about the event with the #jumpwithdrose hashtag on Twitter, Instagram and Vine!

Did you get down to meet him? How was it?