Luke Nelson has become the youngest player selected as Player of the Year in VCars.co.uk Division 1, after being announced as the winner at just 17 years old on Thursday.

The 1995 born Nelson has been the leader of league winners Reading Rockets this season and adds another accolade to his ever increasing basketball resume, having helped the England U16 and U18 national teams to promotion for the last two summers and being England’s Player of the Year in 2011 (U16) and 2012 (U18).

Nelson averaged double figures in scoring for Reading all season and has come up with some huge plays, including a buzzer-beating three point shot in the Playoff quarter finals that sent Rockets into this weekend’s Final Fours.


Meanwhile, Team Northumbria’s Marc Steutel (pictured below, right) won his second straight Coach of the Year award, having won it in Division 2 last season, and this year taking the Division 1 honour. 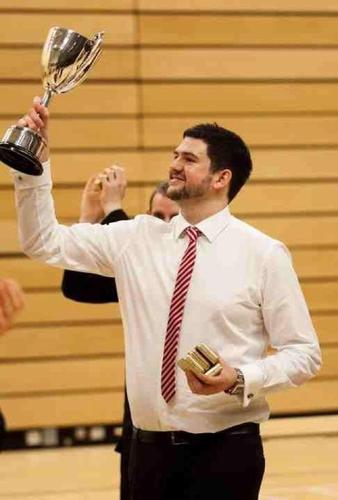 Team Northumbria finished third in their first VCARS.co.uk D1 Men’s season and have also earned a trip to this weekend’s Final Fours.

For the women, Cardiff Archers’ player coach, and GB veteran Stef Collins took the Player of the Year award in Division 1, after averaging 18.2 point, 9.5 rebounds and 4.5 assists per game, whilst Barking Abbey’s Mark Clark won his second consecutive Coach of the Year award.

The full list of VCARS.co.uk Players and Coaches of the Year for 2012/13 is below:

*Players of the Year Runners-Up

*Coaches of the Year Runners-Up

*Runners-up not included for VCARS.co.uk D4 Men as the tallies were too far spread to warrant such a decision.

Selections were made based on votes cast by teams in each respective league, with a points value given to first, second and third place nominations.

Congratulations to all the winners! What do you think? Agree/disagree with any of the selections?

Related ItemsCoaches of the YearLuke NelsonMarc SteutelPlayers of the Year
← Previous Story Off Court Ep. 2 – Tyrell Isaacs
Next Story → Worthing Thunder Advance to D1 Final on Interference Call at the Buzzer!