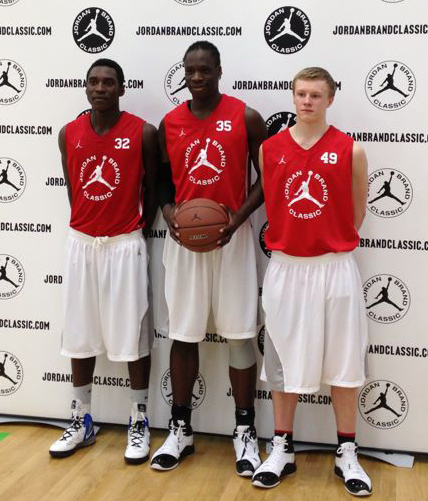 Last year’s promotion to Division A was a huge achievement for the under-16s, as they became the first British male junior squad to reach the top flight.

But this year’s side face the arguably even tougher task of retaining that Division A spot, with the players who got them there having all moved on to under-18 level.

The coach who helped win promotion, Simon Fisher, has also moved on, but with under-15 boss Andreas Kapoulas stepping up and bringing more than half of that team with him, they should have chemistry on their side.

England’s warm-up programme began back in December with the Haris tournament in Manchester, where they were pitted against under-18 sides from across Europe. They understandably struggled, with their only victory coming against Manchester Magic’s under-16 side.

They went 3-4 in an under-17 club tournament in Italy in April, before beginning a tough series of games against Division A sides leading up to the Euros. The team went 0-6 in those games, but it will certainly have prepared them for the level of competition they’ll face in Latvia.

Point guard. The play of Jules Christian (pictured above, far left) will be crucial to the team’s success. A smooth player who’s strong enough to finish around the rim, he has more experience of high-level competition than anyone else, having spent the past year playing in the junior program at Union Olimpija, one of the top clubs in Europe.

There’s depth at the point, with Myles Laurent-Smart, a good pick & roll player who can cause problems with his quickness, and Sedale Hanson-Young providing scoring and defense.

Shooting guard. Liam Carpenter (pictured above, far right) is one of the better outside shooters on the team and a good fundamental defender who does a good job of forcing steals. Combo guard Dwayne Lautier-Ogunleye is a dynamic player who can score in a variety of ways, particularly around the basket.

Small forward. Despite being one of the youngest players on the team, the England coaches clearly consider Josh Steel one of the team’s most important players, as he averaged a team-high 34 minutes in the recent warm-up tournament in Spain. He’s an unselfish offensive player and a good defender.

Manchester Magic forward Joe Swindells is a good rebounder for his size and can hit the outside shot. Joe Mvuezolo, one of three Nassa players on this team, is an athletic slasher with long arms.

Power forward. Marko Backovic is a versatile player who can do a little bit of everything. He’s a good passer, though undersized for the four. Justas Muzikevicius is the most skilled of England’s big men, though he struggles at times with more physical opponents.

Centre. This year’s team don’t have a presence quite like Kingsley Okoroh, but in 6-7 Theo Oghide (pictured above, centre) they have an athletic, physical big man who sets good screens and gets after it on the glass. Medway Park’s David Couchman provides more size than Oghide, though his game is considerably more ground-based.

England will know what to expect in this group, having faced two of their opponents in last week’s warm-up tournament in Spain. They lost 85-55 to Italy, but were only defeated by seven against Turkey – though it would be a mistake to assume that the Turks, who won that tournament after defeating Spain and Italy, will be anything but overwhelming favourites against England.

It doesn’t get any easier with the final team in the group, Croatia, who are likely to feature a couple of players from last year’s gold medal-winning side.

Avoiding relegation would be a huge achievement. It’ll be incredibly difficult, but one or two wins could be enough, and England’s tough warm-up schedule has ensured that they’ll know exactly what how much effort it’ll take to get the job done.

The England U16s tip off their Division A run on Thursday 19 July against Turkey. Follow @Hoopsfix on Twitter for live updates, and keep checking back to the site for news!