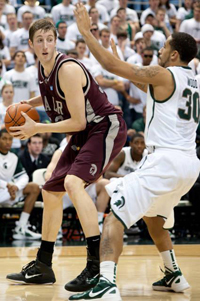 Will Neighbour has revealed he has received an invite to Great Britain Senior Men’s camp, but will not be taking part in any national team duties this summer having elected to have surgery on a torn labrum in his left shoulder and a torn left bicep.

The 6’10” Neighbour would have been an outside shot to make the final Olympic roster, but would have played for the Under-23 squad in a tournament in England before being flown to Houston to join the senior side for training camp.

University of Arkansas Little Rock’s rising star forward sustained the injury late in a Dec. 31 victory at Denver, forcing him to miss two games and wear a protective sleeve for a large part of the season – he can no longer put off the surgery that will keep him out an estimated 3-6 months.

“Will Neighbour figured he had spent enough time being torn between what he wanted and what he eventually realized he needed.

The UALR junior forward previously planned to have surgery to repair a torn labrum in his left shoulder and a torn left bicep about a week after the Trojans’ men’s basketball season ended March 4.

But he spent almost a month debating whether to have surgery now, followed by three to six months recovery time, or putting it off so he could pursue a spot on the British national team for this summer’s London Olympics.

“It was really tough” he told the Arkansas Democrat-Gazette.

But not long after UALR’s spring break ended March 25, Neighbour decided his best interest should be with his current health rather than a unique opportunity to play for, and in front of, his home country.

So he’s scheduled a surgery for April 12 in Little Rock, putting an end to a bid to make the British Olympic team before it really began. He said he could be back on a basketball court by August, and almost certainly by the time practice begins in October.

A successful pursuit of a spot in the Olympics would have tied him with the British national team until August. A surgery scheduled after that would have kept him away from basketball until December, a month into UALR’s season.

Plus, a spot in the Olympics would have meant playing even more games with an uncomfortable injury in his shoulder initially suffered late in a Dec. 31 victory at Denver.

“Playing with those big guys, you never know what’s going to happen,” Neighbour said. “The (shoulder) could come out again. … I figured out what I really needed to do.”

…He said he received an email recently that asked him to spend a few days in England for an under-23 tournament this spring, then head to Houston — Houston Rockets assistant coach Chris Finch is the British national team head coach — in June for a camp that would decide the final roster.

Neighbour said about 16 players were invited to the camp, and the final roster would include 12 to 14 players. The 6-10 Neighbour thought his outside shooting — he made 41.3 percent of his three-pointers for UALR this season — gave him an edge on some of Great Britain’s other big bodies.”

Read the full article over at the Daily Journal.