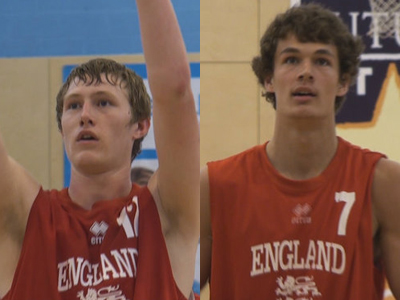 England U18 teammates John Stewart and Devon Van Oostrum have been invited to the prestigious FIBA/NBA camp “Basketball Without Borders-Europe” in Barcelona this September.

The camp, which is invitation only to the top 50 players in Europe born 1993 or later, will see NBA players and coaches flown in to provide coaching and seminars for the young prospects. It will also be a chance for Van Oostrum and Stewart to go up against the best players in their age group in Europe as players will be split into teams and play competitive games.

Devon Van Oostrum who is signed with ACB side Saski Baskonia of Spain is looking forward to matching up against the best, speaking to Hoopsfix he said:

“I’m looking forward to competing against the best players in Europe and showing that English players belong right up there with the rest of them.”

John Stewart is equally excited, the 6’5″ forward out of Sheffield had this to say:

“It’s a great opportunity and honour to be selected for such a great, well known camp. Just hope I can go out and represent!”

The  camp in Barcelona will be the last Basketball Without Borders camp of the summer following on from one in Asia (Singapore) and one in Africa (Senegal).

Big shout out to these two guys who are reppin’ the UK to the fullest!