GB Men Finish Top of Group B Despite Loss - Hoopsfix.com

GB Men Finish Top of Group B Despite Loss 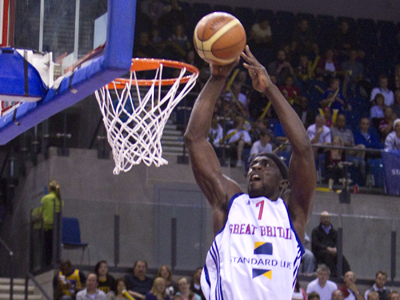 Pops Mensah-Bonsu had another double double before fouling out

Great Britain managed to finish top of their Eurobasket 2011 qualifying group last night despite losing in their final game of the campaign 75-66 to Ukraine. Thanks to Bosnia & Herzegovina upsetting Macedonia 83-71 in Sarajevo, GB have secured first place in Group B with a 6-2 record.

Finch remained positive after the game, despite the loss:

“This was a tough game and we rallied in the second half and gave ourselves a chance to win” he said.

“Flinder [Boyd] gave us some good minutes. Pops brought a lot of energy and triggered our run in the second half.

“We have a lot to be proud of. Not many people gave this team a chance to qualify and we did it through great effort. Our young players played well and gained immeasurable experience from this campaign.

“Next summer provides us with a chance to play against the best in Europe once again. I am looking forward to the 2011 campaign and I know the players are as well.”

Full box score and play by play available here. The team will now join their respective clubs for the season before rejoining next summer to prepare for Eurobasket 2011.