Steutel, GB not phased heading into 'do or die' window - Hoopsfix.com

Steutel, GB not phased heading into ‘do or die’ window 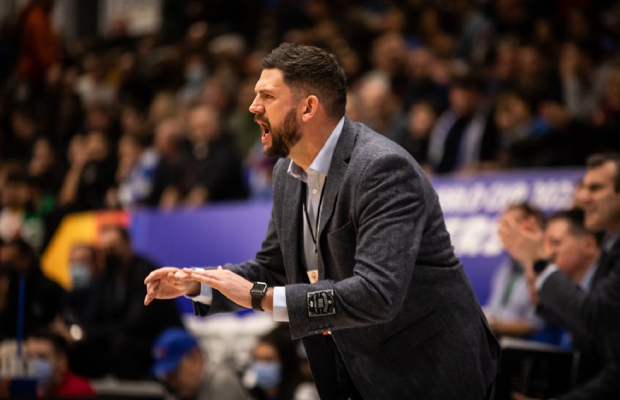 Acting Head Coach Marc Steutel says his squad are not phased by the need to win their remaining four games to still have a shot at FIBA Basketball World Cup 2023 Qualification.

The Great Britain Senior Men currently stand at 1-5 in the qualifiers, preparing to face Serbia and Latvia on Friday and Monday (watch live on Courtside 1891 – use code HOOPS-WC for 15% discount on annual and World Cup bundle passes), respectively, before the final window in February 2023.

“I guess our approach has been that we try and just focus on the game ahead of us,” Steutel told Hoopsfix.

“You know, and I know it’s a bit of a cliche, but this group over the last four years has shown when our backs against the wall, we’ve been able to kind of thrive, make some noise and prove some people wrong.”

Forever the professional, Steutel re-takes the helm with Head Coach Nate Reinking once again unavailable due to his NBA commitments with the Cleveland Cavaliers.

Questions remain over how tenable his position his, having led the squad this summer for the first time since 2019, with the majority of the FIBA windows falling in-season.

The game on Serbia on Friday night in Newcastle (19:30 tip) will be the first time GB has taken to the floor after their disastrous EuroBasket campaign under Reinking, an outing that saw the federation’s management once again be brought under the spotlight, with the team going 0-5 and finishing 24th out of 24 teams after just 3 practices prior to the tournament. 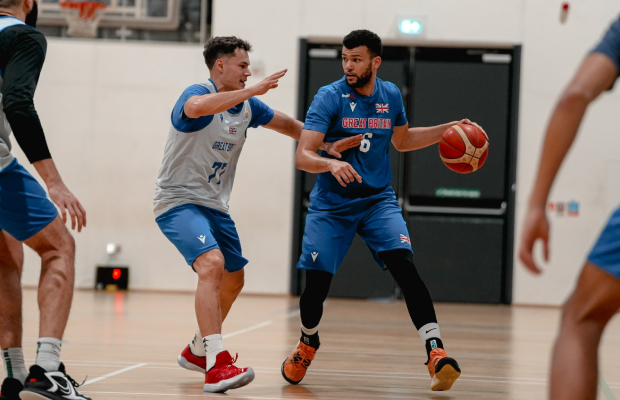 Steutel is aware that there could be lingering effects on the squad, even though there are a number of new faces in the group.

“I think it was something that I was acutely aware of coming in.

“Even with myself, I felt that personally, I had the wind knocked out my sales a little bit, and I’m sure the players did too. So, for people that were involved in that campaign I feel like I’ve communicated with everybody, we opened up the camp with an opportunity to talk about certain things and obviously we wanted to look at the controllable elements from EuroBasket.

“…The players should be extremely proud of how they committed and tried to do the right things in a really challenging situation.

“We tried to echo that message in the start of camp. We tried to ensure that everybody had an opportunity if they wanted to discuss anything. And then we tried to put that to bed and say ‘what can we do as a group to continue to develop, to move forward?'”

This marks the start of a new era for the programme, almost a third of the 13 in the camp have never been in attendance before; Aaron Menzies, Quinn Ellis, Josh Sharma and Amin Adamu.

Stalwarts Ovie Soko – who missed London Lions last BBL outing on Sunday – and Myles Hesson, who is playing in Japan, will not be available, while Dan Clark, who has suited up every year possible since 2008, has officially retired, moving into a General Manager position for the programme.

“When Dan made that decision post EuroBasket, similar to federations that do it right; Greece, Turkey, Spain, who have really influential players that want to give back, like feed forward and give a lot to the game, it was important that we did that with Dan.”

His role includes communicating with players and agents – something the federation has not done a good job of over the years, being a sounding board for coaching staff, and giving a voice in on and off court decisions.

“It’s positive that somebody like Dan, who has got that much experience and so much to give back to the game and the national team, and a bit of a gatekeeper of sorts, it’s really important that he’s in this role. There hasn’t really been a big lead of time in the role, and I think the longer that he stays in that role, window to window, I think we’ll see a greater impact.”

There are also new voices on the sideline. Andreas Kapoulas is unavailable for this window due to a long-standing commitment, while former GB guard Gareth Murray and City of London Academy’s Jackson Gibbons take up assistant roles – both of whom, Steutel believes are great additions.

The focus at training camp is developing a British identity and style of play, one that centres around defense, spacing and getting out in the open floor.

“We want to be a defensive focused team. We want to make sure that we’re a team where you can see all five guys working for each other. We want to be able to extend that up the floor and try and manage possessions by chipping away the shot clock for the opponents,

“We want to be able to play in the open floor. We always talk about defending to run; making sure that we’re gang rebounding, we’re finishing plays, and hopefully that converts into a good offensive game in the open floor.

“When we get into the half court, we want to play with really good spacing. We want to be really smart, space the floor effectively and allow our offensive players some opportunities to try attack and create advantages and share the ball. We want to pride ourselves on how we can make extra passes, get paint attack, get kickouts and play from there.”

Putting in the work! 😤

🎟️Get your tickets to support the Men's team in action against Serbia at @VertuArena on Friday night!#BritishBasketball

Serbia are ranked sixth in the world, but GB have been given a break, with Basket News confirming that Euroleague stars Vasilije Micic, Marko Guduric, Vladimir Lucic will not suit up in this window until Monday against Turkey.

“This is a high level team, with high level players that we’re playing. But I also think that what we’ve learned from these windows is that, everybody pretty much has the same prep time and you want to try and get the balance right of tactical execution and what I think are good traits of a team; togetherness, toughness

“Togetherness, toughness, staying together, understanding roles. I think the teams in these windows that show the best versions of team basketball, win.

“We understand where our record is, but at the minute the sole focus is, is trying to beat Serbia on Friday night.”

GB take on Serbia at 19:00 on Friday night at the Vertu Motors Arena, Newcastle, with the game available to watch on Courtside 1891 (use code HOOPS-WC for 15% discount on annual and World Cup bundle passes).