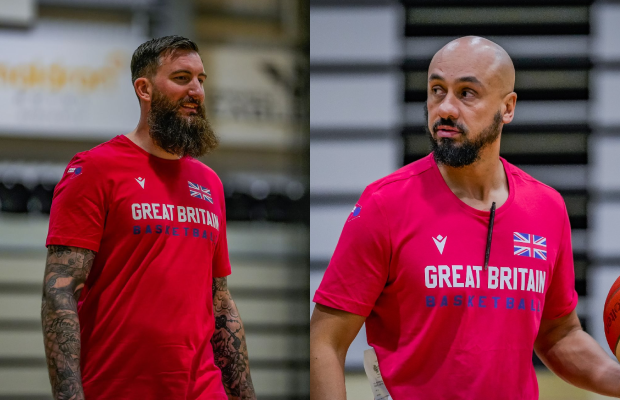 With regular assistant Andrea Kapoulas unavailable in the upcoming FIBA window due to a ‘long-standing commitment’, extra help has been drafted in as GB prepare to take on Serbia on Friday and Latvia on Monday.

Murray, 38, retired from playing in September focusing on his coaching duties with the Caledonia Gladiators in the BBL after 2 years as Player-Coach, while Gibbons has built a reputation after leading one of the top junior development programmes in the country at City of London Academy/Southwark Pride.

A couple of days into training camp, Steutel is impressed with them both and optimistic for what they can bring to the team.

“Gareth is as he was as a player; high IQ, team first, really concise,” he enthused.

“There’s no grey areas with Gareth. I think he’s really clear on the way in which the game should be played and he’s done a tremendous job on leading one of the scouts.

“And then being able to bring somebody like Jackson in has just also been extremely positive. Jackson’s one of these guys who I’ve kind of admired from a distance for a while and I know he’s thought of extremely highly in the coaching fraternity because of the values that he demonstrates.

“Jackson has come in positively again, forging relationships with the players, contributing in terms of team preparation, team identity, and scouting.”

GB take on Serbia at 19:00 on Friday night at the Vertu Motors Arena, Newcastle, and then Latvia away on Monday at 17:30 – with the games available to watch on Courtside 1891 (use code HOOPS-WC for 15% discount on annual and World Cup bundle passes).