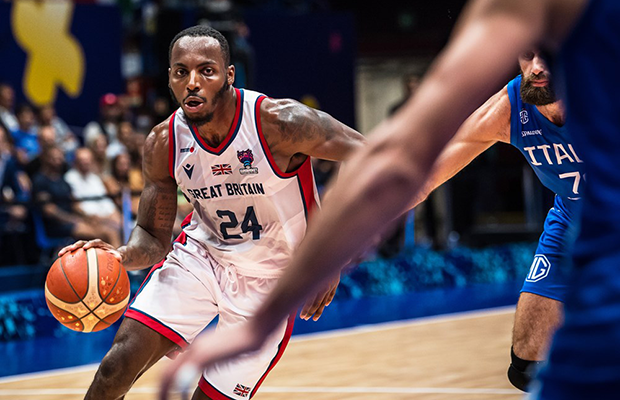 Great Britain Senior Men’s 2022 EuroBasket campaign came to an end on Thursday night with a 90-56 loss at the hands of hosts Italy.

A two-point fourth quarter was symptomatic of the type of tournament it has been for the Great Britain side, who came in under-prepared, and under-resourced but refused to make excuses.

“It was another difficult night for us,” GB Captain Dan Clark commented. “Italy played well, switched a lot, moved a lot and were very active and that caused us a lot of problems. I thought our guys fought as hard as we could, I think we’ve tried as hard as we could for the whole of EuroBasket but it just hasn’t been our week.”

Carl Wheatle led GB with 12 points, 7 rebounds, 3 assists and 2 steals, while Myles Hesson topped the scoring with an 18-point outing.

“It’s tough when you score 2 points in the fourth period and it’s a game of making shots,” GB Head Coach Nate Reinking said.

“I thought we had good looks that just didn’t go down and it ended up being a long 10 minutes at the end there.”

🗣 "I'm not sure when the right time will come to talk to the right people, if there is anyone to talk to, about the situation. It's not ideal. I do think we're the group of people who suffer the consequences of a lot of decisions & I think that has to be addressed" – @Dan00Clark pic.twitter.com/JohQmYKhKF

Questions will now come of British basketball’s governance and how what has transpired has come to be.

“I’m not sure when the right time will come to talk to the right people, if there is anyone to talk to, about the situation,” Clark said in the post-game press conference.

Simone Fontecchio led four players into double figures for Italy with 18 points, as every player on their roster saw at least 8 minutes, leading by as many as 34.