GB Under-18 Men routed by France in European opener - Hoopsfix.com

GB Under-18 Men routed by France in European opener 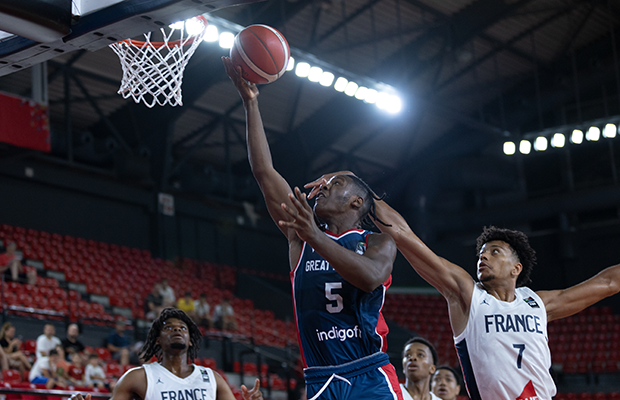 Great Britain’s Under-18s fell to a heavy opening loss in their Division A campaign at the FIBA U18 European Championship as they were emphatically beaten 97-45 by France in Izmir, Turkey, on Saturday.

All teams advance to the Round of 16 stage, and Craig Nicol’s side will have an immediate chance to bounce back when they take on Israel on Sunday in their second Group A game.

Latrell Davis was the only player in double figures for GB with 10 points, while Ben Brown had 8 and Louie Tucker 7. France had five players in double figures, dominating in every statistical category, as all 12 players on the roster scored.

Brown and Davis both hit early threes in a competitive start before France used an 8-2 run to move ahead. GB managed to keep it close as Davis found success in attacking the basket and they were only 19-15 behind after 10 minutes.

However, France began to dominate in the second as they opened with a crushing 23-5 run as GB were unable to contain their free-flowing opponents with the gap ballooning beyond 20 points. They were being outperformed in all departments and facing a 53-27 deficit at the break.

It was a similar story when play resumed as France remained in complete control as they outscored GB 26-4 in the third quarter to extend the gap to 48 points. GB got back into double figures in the fourth in a more competitive final 10 minutes as they were edged out 18-14.

– GB are next in action on Sunday when they face Israel at 2pm UK time
– GB’s starters: Round, Davis, Brown, Michaels & Cholevinskas
– GB have had back-to-back top eight finishes in Division A (2018 and 2019)