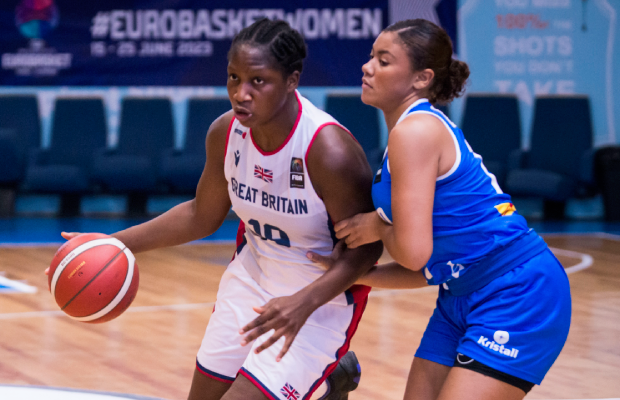 Great Britain’s Under-18s claimed 11th place at the FIBA U18 Women’s European Championship, Division B in dramatic fashion after beating Iceland 71-69 in an astonishing finish.

Kenrick Liburd’s side trailed by three with less than 10 seconds left on the clock, and up stepped Fatmata Janneh. An insane three from the logo to tie the game before coming up with the steal and layup at the buzzer to spark wild celebratory scenes for the win.

Janneh from the logo, then the steal/finish FOR THE WIN!

Four points apiece for Wroe and Januszewska set the tone early on before Janneh hit a triple to make it 15-7. The last four points of the quarter went to Bunyan to put GB 23-13 ahead, and the gap became 12 points when Forster connected from downtown in the second.

Violet Stutz hit from the corner to put a stop to Iceland’s 8-0 run as their lead was cut down to five at 34-29 going into half-time.

Iceland briefly moved ahead in the third either side of threes from Edwards and Wroe before Grace Strickland followed suit. A 6-0 run from Iceland saw their advantage restored, but Forster’s buzzer beater put GB up by one at 51-50 with 10 minutes to go.

The Ipswich starlet sparked a 5-0 start to the fourth, but Iceland made the late move to take the lead ahead of the final minute. GB had a chance to re-take the lead, but saw Iceland score again to make it 69-66. Cue the craziest of 9.8 seconds to unfold.