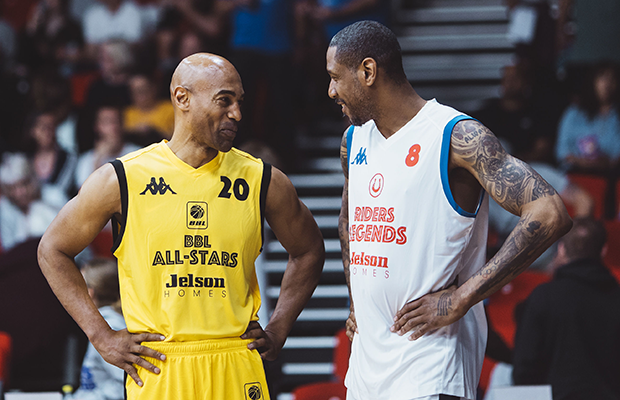 A host of current and former British Basketball and Leicester Riders stars came together for Rob Paternostro’s testimonial game on Saturday evening at Morningside Arena, Leicester.

The game, which was to celebrate 14 years for Paternostro as Head Coach of the club and raise funds for the seven time BBL coach of the year, saw the BBL All-Stars emerging 94-91 victors against the Riders Legends.

The game came down to the final seconds, as the teams traded the lead in the final minute. The Riders Legends had a shot to tie, but Tyler Bernardini’s shot fell short to end the game. 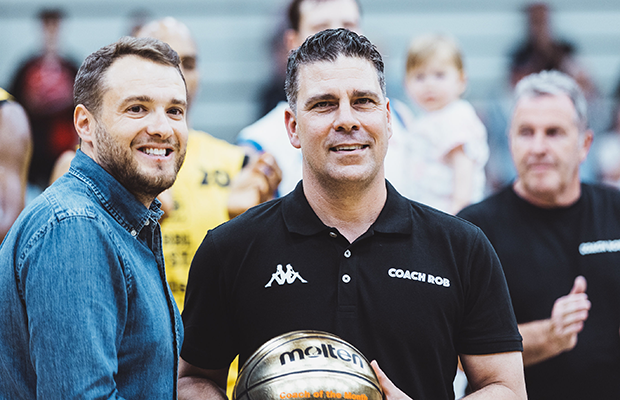 “It’s awesome,” Paternostro said of the game and turnout. “When we decided to have this game, I wanted to bring as many great players and legends from this league that I can. When you look at the names on the back of the jerseys these guys have done so much in the British game and been great for our game.

“The wins are great, the trophies are great, so many magical moments but it’s sitting in the locker room (tonight) and seeing a bunch of friends there. These guys are my friends, they’re like family, even though we haven’t seen each other for a long time it felt the same. And tonight, yeah there’s a game out there and everything but it’s about the relationships and friends I’ve made in this game.”

London Lions’ Dirk Williams was named MVP for the BBL All-Stars, with Bernardini picking up the honours for Riders Legends.

The Riders Legends in action tonight at the @LeicesterArena.#BritishBasketball pic.twitter.com/YcPs5EqzaU

The likes of GB Olympic captain Drew Sullivan and former BBL MVP Zaire Taylor suited up for the Riders Legends, while the BBL All-Stars saw a number of key opponents Paternostro has faced over the years including Fab Flournoy who flew in from Toronto with fellow Newcastle Eagles’ Charles Smith and Darius Defoe, along with Sheffield Sharks captain Mike Tuck.

“For the Riders, he’s meant everything,” Sullivan said of Paternostro.

“He’s a guy who brought in players that you see the quality straight away, he’s set a high standard for this club. From the moment I got here, I knew that I was going to enjoy playing for him, because we’re like-minded, he’s very demanding. Never had a practice off, never had a play off. He saw what guys could bring and once he saw the level he expected of you, he never let you let up.”

Current pros Devon van Oostrum, Jordan Williams, Matthew Bryan-Amaning, Josh Steel, and Tayo Ogedgenbe all featured, as it was reflective night to look back on Rob’s tenure and what he has meant to the club and league.

“They were all battles,” Flournoy said of his Eagles’ match ups with Rob and the Riders.

“I think myself and Rob, we grew together, spurred each other on to be successful and whether we won or they won, it didn’t matter because when we lined up, the other team was sitting there like ok we will see you there next year. It spurred us both on, both ways. It was us battling each other, pushing for the greatness and the history shows.”

“He’s legendary, that’s the type of word you have to use for this guy. His track record speaks for itself, the consistency has been absolutely amazing to watch.”

You can watch the game back in full here: