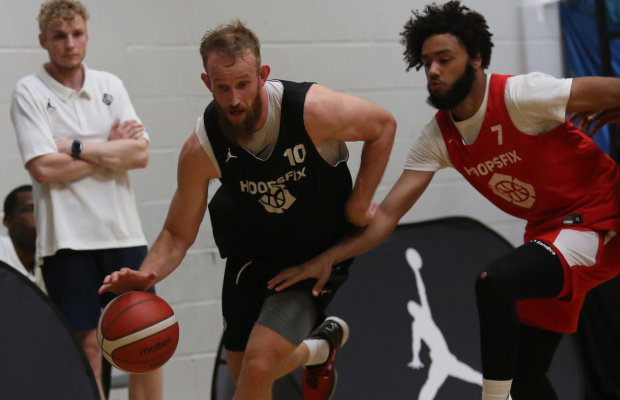 Two unbeaten teams remain in the Hoopsfix Pro-Am with Glacier Boys and Run & Jump both picking up their second wins in Week 2 at the City of London Academy, on Sunday.

Run & Jump moved to 2-0 in Pool B by beating Elite Bulldogs 80-52 in dominant fashion, while London United earned an upset 55-44 win over Worthing Thunder for their first success. In Pool A, Glacier Boys closed out the day with a 58-44 victory against Hoopspace with Thames Valley Cavaliers bouncing back from last week’s loss to see off CoLA, 55-50.

The action began with Run & Jump’s second win of the tournament as they eased past the challenge of Elite Bulldogs behind 15 points and seven rebounds from Kyle Carey. Four other players reached double figures as Josh Apple and Luke Busumbru added 14 points apiece, while Amin Adamu and Alex Distras – both back from the US – had 11 points each.

Romario Spence and Peter Turay both posted 21 points to help lead London United past Worthing Thunder as they used an 18-7 fourth quarter to take the win. Spence hit back-to-back threes to fire London United ahead before Turay put the finishing touches on the victory down the stretch.

Those ones where you try to tear the rim off 😈@peterturayii pic.twitter.com/VyantQVcP6

Worthing are now in must-win territory in Week 3 if they are to make the semi-finals as they take on Elite Bulldogs, while London United come up against unbeaten Run & Jump, who are not yet guaranteed a place in the last four.

Glacier Boys continue to be the frontrunners in Pool A, although their semi-finals spot is still undecided heading into next week, despite moving to 2-0 after coming out on top in the unbeaten battle with Hoopspace. Flynn Boardman-Raffet led the way with 15 points, two assists and two steals with Joe Hart adding 14 points and Rob Gilchrist with 12.

The game went back-and-forth for much of the first half and there were still only four points between them heading into the final quarter. Boardman-Raffet scored five points in a 7-2 burst as the gap quickly grew to double digits midway through the fourth before a long-range dagger from Gilchrist followed.

Earlier, TVC denied CoLA in the battle for a first win as they edged a hard-fought affair and now occupy second spot in the race for the semi-finals. They come up against high-flying Glacier Boys next, however, while CoLA could still make the top two if they defeat Hoopspace and get the required points differential.

You can re-watch all games from Week 2 below: