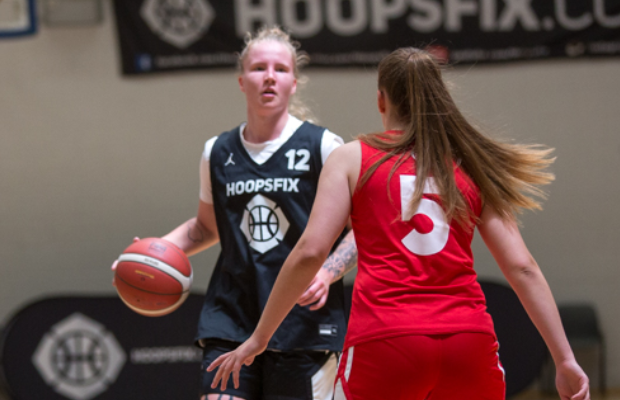 Team Emerald maintained their unbeaten start to the Hoopsfix Pro-Am, while Team Sapphire claimed their first victory at the City of London Academy, on Sunday.

It was an unbeaten battle to open Week 2’s action as Team Emerald held off Team Diamond in a 56-53 triumph before Team Sapphire fought past Team Ruby to pick up a 47-40 success.

Jenelle Grant was the leading scorer for Team Emerald for the second week running as the only player in double figures with 10 points in a balanced scoring effort. Molly Lavin scored nine points with MJ Sarkodee-Adoo and Jessica Bakhsh adding eight points apiece.

The group leaders edged the first quarter 15-13 before pulling away in the second through six points from Sarkodee-Adoo as they established a 31-19 cushion at half-time. However, Loren Christie – who finished with a game-high 21 points – led the fightback for Team Diamond as they used a 13-0 run to take the lead at 46-44 in the fourth.

Bakhsh had the final say for Team Emerald with the go-ahead three in the final minute and that proved decisive.

Later, GB international Shanice Beckford-Norton made an appearance for a short-handed Team Sapphire and contributed 10 points with CoLA duo Funmi Amode and Isi Ozzy-Momodu combining for a further 20 points in the win with all six players on the scoresheet.

Janice Monakana and Shequila Joseph were both in double figures for Team Ruby with 13 and 11 points, respectively, as they now drop to 0-2. Monakana scored six straight in an 8-0 run in the fourth to make it a one-possession game, but German Elea Gaba came up with successive scores to ice the win for Team Sapphire.

You can re-watch both games from Week 2 below: