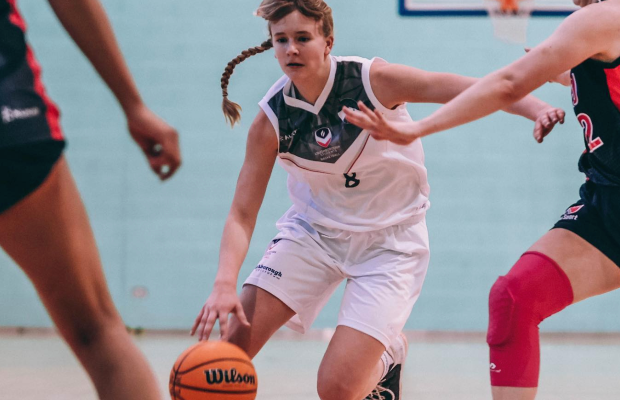 The WNBL Division 1 playoffs get underway this weekend after the 2021-22 regular season reached its conclusion.

CoLA wrapped up the league title with three games to spare as they eventually finished with an impressive 20 wins with their all-Under-19 roster.

Here’s a look through the quarter-finals matchups:

The league winners start their pursuit of more silverware in the post-season by welcoming eighth seeds Bristol to the capital. CoLA celebrated another WEABL title in midweek as Emilie Black picked up the MVP award and confidence remains high heading into the playoffs.

Isi Ozzy-Momodu averages a double-double in league play for CoLA with Funmi Amode and Emily O’Connell also in double digits in scoring for a team that buys into the ethos all the way down the bench.

For Bristol, they had started the season with four straight defeats before winning three of their next four. They recorded an impressive double over Ipswich in February and also beat Thames Valley on the road in a successful month to ensure they locked up a spot in the top eight with a 9-22 record.

Leila Jepson is the team’s leading scorer, closely followed by Mai Zilbeti in a role off the bench with ’05-born guard Emma Bailey also impressing for the Flyers this season.

Ipswich are the defending playoffs champions and have a much-changed roster this season, albeit still with the services of star forward – and 2021 Hoopsfix All-Star Classic MVP – Cameron Taylor-Willis. They made a 5-1 start to the league campaign and became the first side to defeat CoLA at the start of February before two defeats to Bristol followed in the month.

Ava Battese has been a strong addition; averaging a team-high 17.3 points per game including a huge 41-point performance with 11 three-pointers in December. Meanwhile, ’05-born guard Olivia Forster has made a seamless transition to D1 action with Taylor-Willis posting a double-double on the season along with important leadership.

Anglia Ruskin should provide strong opposition with the two teams splitting their regular season matchups and they closed with a 21-point win at Loughborough. They finished a win behind third place having enjoyed a run of eight wins in nine in the early part of the season and overcame a run of three straight losses last month.

Katrin Hulme has been amongst the league’s most efficient performers once again having had a spell with WBBL side Sevenoaks Suns last season. Hulme finished the regular season with a 30-point, 26-rebound double-double – averaging 14.9 points, 15.2 rebounds and 4.5 assists per game with Courtney Gray next in the team’s scoring charts.

Thames Valley went from 6-12 last season to third spot with an impressive 15 wins. They opened up 2-2 in league play before putting together a run of seven straight wins, which was later followed by another four-game streak, though they did lose three of the last four heading into the playoffs.

Kat Goldsby has played a major role once again for TVC with averages of 16.7 points, 6.4 rebounds and 2.4 assists per game, while the likes of Eleanor Bishop and Ezekiela Lisk are amongst the supporting stars.

Cardiff also enjoyed a change of fortunes as they finished comfortably above .500 with a 13-9 record having only won two of their 18 league games last season. The Archers’ second team have not lost since the end of February as they closed with a six-game win streak that also featured a five-point win over the Cavaliers.

Amber Deane starred with consistent all-round performances including a scintillating quadruple-double, while the Archers have also been boosted by the growing displays of young stars such as Issy Bunyan and Carys Roy, who both averaged 13+ points per game.

Loughborough finished second in the league with a 17-5 record as they improved on their 2020-21 league showing of third. They began with five straight wins before successive losses to Thames Valley and CoLA, though they would become the second team to inflict a loss on the league champions with a 16-point road win a couple of weeks ago.

The Riders have plenty of depth to their roster with many players also featuring in the WBBL, including leading scorer Katie Januszewska. Meanwhile, Robyn Ainge is averaging 12.4 points, 6.8 rebounds and 4.3 assists with Erin Hikin and Sasha Lecuyer amongst their dangerous outside shooters.

Solent enjoyed a solid campaign with 13 wins to their name in the league to comfortably make it inside the top eight. The Kestrels won four in a row in March in a span that included home wins over top-four opposition in Thames Valley and Ipswich, who avenged the loss on the final weekend.

Faye Endean is putting up 16+ points per game for Solent with the influential Krisztina Velkey-Cleeve making a welcome return since giving birth. Lauren Dabbs was previously with the Loughborough programme and will take on her former side.

Stats via basketballengland.co.uk – not all games recorded.