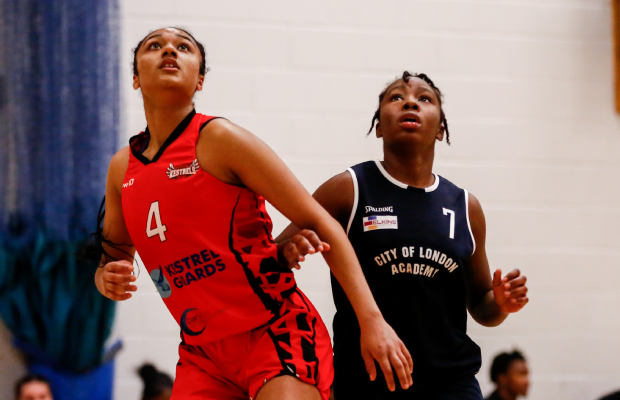 City of London Academy and Solent Kestrels will contest the WNBL D1 playoffs final later this month after coming through contrasting semi-final encounters.

The league champions swept past Anglia Ruskin University in a 67-38 victory, while the seventh seeded Kestrels battled past Thames Valley Cavaliers on the road to secure a 67-74 triumph.

CoLA continued their strong form as they quickly established a double-digit advantage against ARU with Jackson Gibbons’ side up 21-8 after 10 minutes. The gap was only extended by two going into half-time with a 15-point cushion, but the hosts powered on in the second half as they kept their opponents to just 14 points.

On Saturday, Solent used a dominant 21-10 second period as a platform for their win against third seeds TVC, though they still needed a 7-0 run in the fourth to make sure of victory.

Taylor Gaffney starred with a 27-point haul with five steals with Lauren Dabbs netting three triples in an 11-point display off the bench. Saffie Jarju added 10 points and 10 rebounds for a double-double to help the Kestrels advance.

The final will take place on Sunday 24th April at the NBPC in Manchester with the D1 playoffs title on the line.

Meanwhile, the WNBL Division 2 playoffs final will take place on the same weekend as Manchester Mystics II take on Sheffield Hatters II. Exciting young prospect Charli Wroe completed an upset for the Mystics over National Cup champions Stockport Lapwings with a game-winning and-1 in the dying seconds.