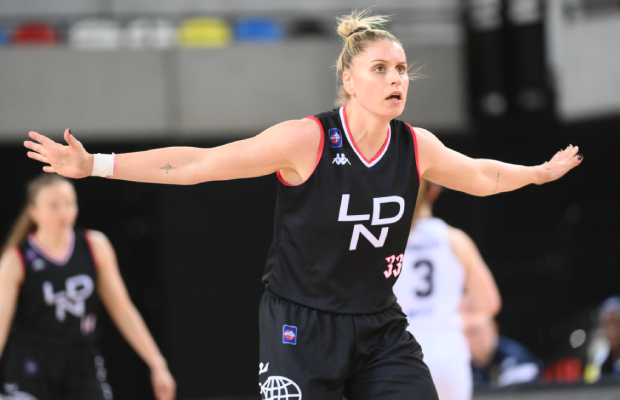 It’s that time again to look back on the WBBL season with our unofficial Hoopsfix awards looking back on the 2021-22 season.

The league’s official awards are voted upon by the coaches of the 13 teams and are usually revealed in the lead-up to the playoffs finals.

The decisions never seem to get any easier, but here’s the rationale behind the choices:

Three of the league-winning Lions, the WBBL’s greatest ever player and this season’s leading scorer.

Kennedy Leonard led the league in assists for the second year in a row after averaging 8.3 per game to orchestrate the offence for the Lions. The Scotland 3×3 international broke her own single-game league record with 22 assists against Gloucester City Queens and continued to drop dimes for her teammates with 199 in total even with playing time down from 33 minutes per game to 27.5 given the Lions’ added quality and maintained dominance.

Brooklyn Pannell was the only player to average 20+ points per game this season with multiple Player of the Month awards. But what impressed the most was just as Nottingham’s season appeared to be derailing, Pannell stepped up for a depleted roster to help inspire a run of four straight victories to seal fifth spot when their playoffs hopes had been fading. The rookie guard had four games of 30+ points in the league including a best of 35 against Durham in the run-in.

Cat Carr is Cat Carr. An incredibly consistent performer that has been invaluable to the success of Sevenoaks Suns over the past five years. An ever-present in the league, Carr’s eighth season saw numbers of 16.4 points, 7.8 rebounds and 7.0 assists per game as the Suns finished runners-up with just three league defeats to their name. A couple of triple-doubles along the way and more end-of-season recognition is surely imminent for the two-time league MVP.

The impact of Jo Leedham-Warner has gone way beyond the basketball court for London Lions this season, but the GB legend has sure given a reminder of her star quality just in case it was needed. We’ll get onto the MVP ‘race’ further down with averages of 15.7 points, 6.9 rebounds and 4.5 assists per game in just 25.6 minutes per outing. The ease in which Leedham-Warner reads the game makes for little surprise for also being the steals leader with 3.4 per game, whilst leading the league in two-point percentage (67%) for good measure.

Azania Stewart is such an imposing presence in the paint for the Lions and the defensive stalwart can shine offensively when needed, too. In a first full year out of retirement, Stewart put up 10.4 points, 6.8 rebounds, 2.8 assists and 1.3 blocks per game in just 22.4 minutes per game and was also named MVP in the Cup final triumph. Stewart also produced bests of 16 points and 14 rebounds in the title-clinching win on Friday.

What could an All-Second Team look like? There’s still so many top performers to choose from.

Shanice Beckford-Norton – the Lions’ captain has been a huge presence off the bench.
Laken James – a free-flowing scorer that helped change the Pride’s season around.
Cassie Breen – an elite shooter who thrived in a new role off the bench for the Lions.
Elle Hendershot – another impactful signing who did a bit of everything for Durham.
Oceana Hamilton – the latest in the line of dominant bigs in the league after propelling Riders to the top four.

Holly Winterburn is another from the Lions in consideration for a spot and you can certainly make strong cases for either Georgia Gayle or Helen Naylor to even be in with a shout of All-First Team honours.

London trio Leonard, Leedham-Warner and Stewart are automatic picks from making the All-First Team and this could easily turn into a Lions starting five given their incredible depth of British talent and success. However, these last two picks are close calls between a pair of teammates and it wouldn’t be a surprise to see any combination make the official team.

Shanice Beckford-Norton edges Holly Winterburn to make the lineup alongside Georgia Gayle, who had a similarly impressive year to Helen Naylor as Sheffield Hatters marked their return to the league. Beckford-Norton was London’s third leading scorer with 14.4 points per game along with 5.3 rebounds and 3.2 assists off the bench, while Gayle posted 15.7 points, 5.1 rebounds and 4.0 assists for Sheffield along with 50+ three-pointers made.

Georgia Jones is also unlucky to miss out having made the official British Team of the Year on every occasion the award has been held. Janice Monakana had a progressively big year for Sevenoaks Suns after starting the year at Sweden, while Hannah Robb stepped up again for Leicester Riders and Sian Phillips continues to push for GB Senior recognition after helping lead Caledonia Pride back to the playoffs after a four-year absence.

It speaks volumes to the level of British quality across the league when you consider the players that don’t make this team.

If last season was regarded as a 50-50 coin flip between Cat Carr and Kennedy Leonard, then this season is about as unanimous as it should get. Jo Leedham-Warner without a question.

The GB legend admitted to having doubts at the start of the season after a long break from the game since becoming a mother, but has just got better and better throughout the year. Leedham-Warner is undoubtedly a great basketball player, but the mentality and leadership abilities are elite which can be the difference at the highest level.

The Lions have been able to lean on Leedham-Warner both on-and-off the court and it has been an unexpected joy to get to witness the former EuroCup winner on UK soil for the first time at senior club level.

Young Player of the Year

This has become the Holly Winterburn award with the 21-year-old already a three-time recipient of the accolade. We set the criteria at Under-19 last year, so we’ll stick with that again even if the official award may differ.

And, in which case there is a clear standout in Praise Egharevba. The German junior international has just committed to Pac-12 side Oklahoma State University and has stepped up for an even bigger season with Nottingham Wildcats having received plaudits 12 months ago.

The 18-year-old had a dominant year in the WEABL, helping Nottingham to the Championship game, and looked completely at home at senior level with several big double-doubles in the WBBL to finish with season averages of 11.3 points and 11.6 rebounds per game in the league.

Meanwhile, Issy Bunyan earned increased playing time for the Archers – alongside starring for the WNBL D1 side – and ranked second in the league in blocks per game.

This goes to Katie Bennett. A former junior international battled injuries in recent years, but has taken on a leadership role for Durham Palatinates this season at the age of 21 and helped the team reach the playoffs. Bennett averaged 12.6 points, 3.6 rebounds and 4.4 assists per game for Durham – up from 5.6 points and 3.0 assists from the previous season.

Defensive Player of the Year

Shanice Beckford-Norton or Azania Stewart. The Lions’ defence has been suffocating at times this season. Beckford-Norton sets the tone and with Stewart patrolling the paint, you’re either getting blocked or having to make a tough shot. The WBBL coaches vote for a Defensive Team of the Year and you’d expect to see multiple players from the Lions.

DISCLAIMER: These are not official awards. Feel free to disagree. No offence is intended.