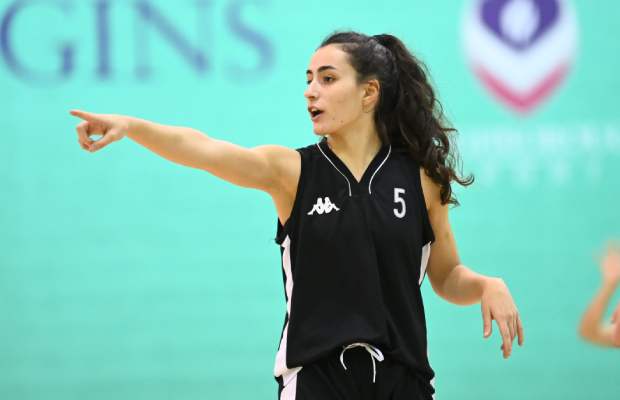 The first weekend of WBBL action in 2022 saw five games take place including the first game of this season’s Trophy competition.

There was a near record-breaking debut and an overtime thriller on a dramatic Saturday with the Rebels advancing to the quarter-finals.

The Lions have another weekend off before their scheduled return to domestic action sees them head to Leicester in a big battle to preserve their perfect WBBL status this season, so far.

Like the Lions, Len Busch’s side still have to wait to commence their New Year’s basketball action with another week to wait before they host Manchester with the chance to continue their unbeaten league record.

Another convincing win for the Hatters as they brushed aside Cardiff on the road to move to 9-1 in league play. The gap hit 50 points at one stage and the visitors had eight different scorers with at least eight points, led by Georgia Gayle’s 20 points.

Sheffield have added further depth with the addition of Ebony Horton and the ex-Newcastle star weighed in with 11 points off the bench on debut. They will look to carry their momentum into their Trophy opener with a trip to face Manchester in an exciting first round clash.

Leicester had been due to host Cardiff on Sunday, but that game has been pushed back to this weekend. The Riders have the chance to strengthen their outright hold on fourth spot in the league after Manchester were beaten.

Down 21 in the first round of the Trophy, things were looking bleak for Essex. However, they turned things around in dramatic fashion with a stunning 28-4 run to take the lead late in the fourth. They were forced into an extra period and Claire Paxton came up clutch with a decisive score to finish with 25 points in the win.

Tia Freeman shone off the bench with a 20-point haul with Carla Bieg and Megan Haines adding 14 and 12 points, respectively. An almighty scare for the Rebels and they now have a week off to prepare for their next challenge which sees them travel to take on Sevenoaks.

Well, the Mystics were unable to back up their home win over Leicester as they saw Newcastle come from behind to take the win on the road. Manchester drop to 6-4 in the league with the defeat having led by as many as nine points in a cagey affair.

Lauren Thomas-Johnson posted 14 points and 10 rebounds for a double-double, but the hosts were held to 26% shooting on a tough afternoon. They stay with home advantage in their next outing as they take on a red-hot Sheffield side in the first round of the Trophy on Saturday.

The Eagles showed great character in overcoming the departures of Ebony Horton and Abby Lowe to pull off an important road win in Manchester. A great credit to Chris Bunten, too, who often gets his side performing even in challenging circumstances.

Maddy McVicar took over in the fourth with 15 points – all from beyond the arc – to finish with 20 in the win, while Chloe Gaynor pulled down 16 rebounds in another battling effort. Momentum to take into their derby clash with Durham with the upcoming Cup final on the horizon, too.

The Wolves are on the hunt in their January home stretch and began by edging out Gloucester for their third league win having led by as many as 22 points. Merissa Quick top scored with an efficient 19 points with Lizzy Harrison posting a first double-double in the WBBL with 17 points and 10 rebounds with five triples.

Oaklands doubled up their opponents with a 20-10 second quarter and had to hold off a fourth quarter fightback to prevail. They host Cardiff to get their Trophy campaign underway before also welcoming Caledonia in a crunch league encounter on Sunday having moved into the playoff spots.

Nottingham have three wins from their first 10 league games – their worst ever start to a WBBL Championship campaign and they were unable to contain an inspired Abby Lowe on their travels in Durham. A 15-point defeat dented their chances of consolidating their place in the standings and now drop out of the top eight.

The Wildcats were missing starting guard Shaunay Edmonds as they coughed up 30 turnovers in the contest, though Natalie Charity did earn an increased role and had some bright moments with double-doubles for Kennedy Nicholas and Imani Whittington. They turn their focus to the Trophy on Saturday as they welcome Gloucester in a first round encounter.

Just the 38 points on Durham debut for Lowe – two shy of the all-time WBBL Championship record. The GB 3×3 international had 22 in the first half to propel the Palatinates to a strong start and they ended up picking up a vital second win by beating Nottingham by 15.

They next take on Newcastle in a North-East derby in the first round of the Trophy to give Lowe an early trip back to her former side. Lee Davie’s side have twice been to the final of the competition and victory on Saturday would be a big statement.

Up 21 in the first round of the Trophy, things were looking great for Caledonia. However, they would need a late three from Laken James just to take the contest with Essex into another period. Another triple from the American tied the game late in overtime, too, but it was a heartbreaking defeat for Pride.

James finished with a team-high 23 points with Taylor Edwards posting 12 points, seven rebounds, six assists and 10 steals in an all-round display. Caledonia return to league action rooted to the bottom of the standings as they take on Oaklands on the road having lost a close one last month.

In their first game since December 4, the Queens battled back to set up a tense finale on the road against Oaklands. Melita Emanuel-Carr finished with 24 points and 10 rebounds for a double-double against a former team with Marlee Ball added 18 points and 10 boards with the duo carrying a lot of responsibility.

Gloucester had rallied from a 22-point deficit to close to within two points as they fell agonisingly short. Carolina Marques scored nine points on debut and has been joined by another former teammate with Shanice Turner joining the club ahead of their Trophy encounter away at Nottingham.

The Archers have endured a tough run with their losing streak stretching to seven straight after a heavy home loss to Sheffield at the weekend. Their task was not made any easier with Shannon Hatch and Lauren Saiki also absent alongside Mara Marchizotti.

Kim Kheing top scored with 12 points as the only player in double figures with emerging forward Carys Roy adding eight points in a bright moment. Cardiff open up their Trophy campaign at Oaklands on Saturday as part of a double-header on the road with a trip to Leicester in the league also taking place.