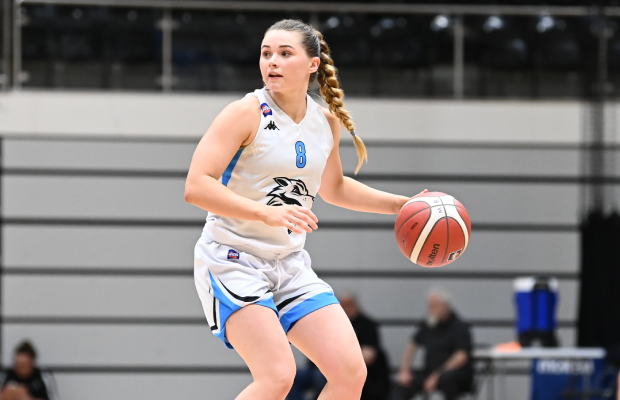 Beth Sarson has taken on additional responsibility this season as one of just five senior players – including newly installed player-coach Lauren Milligan – on the Oaklands Wolves roster.

The 25-year-old returned for a fifth season in the WBBL – one of which was spent with Essex Rebels – and is currently averaging 8.5 points, 4.5 rebounds, 3.3 assists and 2.4 steals per game in the league.

Difficulty level: 📈@bethanysarson with the steal then goes over the shoulder to find @LaurenMilligan6!

Sarson netted a season-high 12 points in Friday’s 107-42 defeat away at London Lions at the Copper Box with Oaklands sat in 10th place in the WBBL Championship standings with a 2-6 record.

However, the Wolves are only half a game back from the coveted top eight spots having earned both of their wins on the road so far in the league campaign. They return to action with a scheduled run of four straight home games including encounters against Caledonia Pride and Gloucester City Queens.

And, Sarson is targeting that stretch as a chance to make up a move up the table.

“In the new year, we have some games that we believe that we can win and hopefully can start pushing for the playoffs spots,” Sarson told Hoopsfix.

“We came into the game with London wanting to see how we can compete against the best team in the league. We had nothing to lose, so just wanted to play hard and have fun.

“It’s so exciting to see our young players step up. At times, we had five of our younger players on the court at one time and that’s a positive to take.”

The outing against the Lions also saw Sarson come up against former GB Under-20 teammates Kennedy Leonard and Paige Robinson as they all competed at the FIBA U20 European Championship in 2016 – under current GB Senior head coach Chema Buceta. And, now Sarson is helping guide the next generation of players with WEABL stars Daisy Porter and Jocie Leavold earning starting roles in the WBBL as they continue their development at the highest level.

“Just setting the tone,” Sarson said of her role. “It can be quite hard going from junior basketball to this level – it’s a massive jump.

“I remind them that it’s ok to make mistakes in this environment. As long as we don’t make the same mistake over and over and to be fair to them, they adapt really quickly and make changes when needed.

“It’s a massive opportunity. I watch their WEABL games, but this is a whole another level. They have someone in their face and almost every shot is contested so you have to learn.”

The Wolves opted for a change in direction in the summer with the appointment of Milligan as player-coach with even more opportunities given to their academy talent within the senior setup.

There have also been key contributions from Kizzy Spence, Eva Karasaite and Miriam Menendez with the togetherness of the group evident even in the face of defeat. Sarson radiates positivity and praised the overall spirit of the group as well as the impact of the new-look coaching setup.

“That’s one thing that we do is not get frustrated with each other. It’s important to have that balance; saying stuff without taking it personal and being there for each other.

“We get on off court as well on the court and I think it shows. At the end of the day, we just love the game.

“Lauren is a young coach in this league and it’s a hard transition. She has adapted really well, quickly and has respect from all of us. Each game she’s learning too with the help of Albert [Ziwa].

“They do a great job of supporting us, but still challenging us. We’ve got her back and we know that she’s got ours.”

“We’ve got her back and we know that she’s got ours.”

Oaklands are looking to take positive steps forward in their new chapter, and don’t write them off in the battle for the playoffs