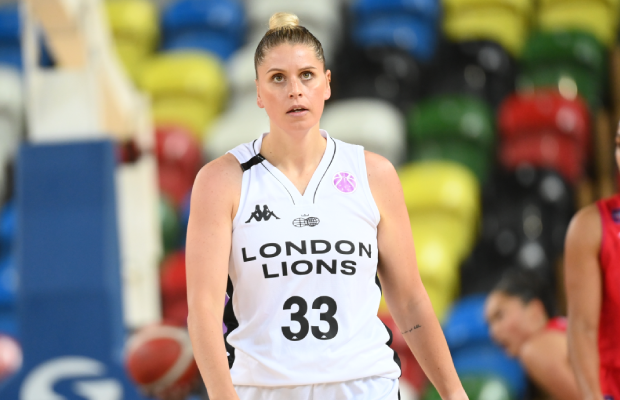 Jo Leedham-Warner faces a reunion with former side Bourges as London Lions continue their remarkable EuroCup journey in the playoffs.

The GB legend won the competition with the French side in 2016 as part of a four-year spell and will return to Bourges for the second leg on December 22 after the Lions host the opening encounter at Crystal Palace on Wednesday (tickets, HERE).

London were the final side to qualify for the playoffs with a date set with the top-ranked team from the regular season to cement the ‘Leedham-Warner derby’ matchup.

“Being drawn Bourges honestly just made me feel like wow,” Leedham-Warner told Hoopsfix. “I’m a believer in things happen for a reason and the past year and half has been a whirlwind.

“My initial thought was I have to take Isla with me, she needs to be at Bourges with me. Going back will be so lovely. My parents are coming and my daughter – it sounds crazy still when I say that out loud.

“Bourges has such a special place in my heart, I spent a lot of time there and made so many memories and met so many amazing people. I couldn’t be happier that I get to show this place to my child.

“That’s something I never ever thought would happen. It’s just so much more than basketball for me and that’s why I love it so much.” 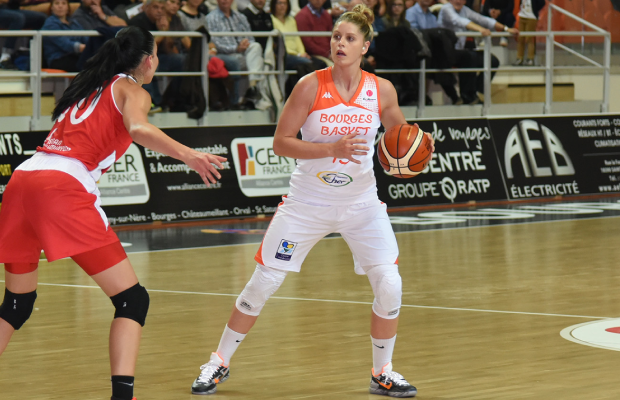 The preceding events to Leedham-Warner and the Lions finding out they would be facing Bourges were far from straightforward as their hopes went down to the final moments of Gameday 6.

London’s 70-67 defeat away at Castors Braine in Belgium 24 hours earlier had taken fate out of their own hands, although the small margin of defeat as a result of an inspired fightback would prove crucial.

They needed a dramatic one-point victory for Zabiny Brno away at Keltern to first confirm third spot and then needed to have a better record than one other same-place finisher. Tenerife came back from 19 down only to fall to an overtime loss to Fribourg, but defending champions Valencia would overturn a double-digit deficit to beat fellow Spaniards Ensino by seven to confirm the Lions as the 32nd and final team in the playoffs.

“I was watching different games at the same time and relying on results that I thought I wouldn’t even have to watch, so it was pretty entertaining,” reflects Leedham-Warner.

“As the games were winding down, I was also on the phone to my dad and he said doing the math he was certain I was going back to Bourges. Sure enough as the games ended, tweets flooded in.

“I just sat there and thought what a historic moment for women’s basketball in Britain. And, I was just really proud, happy and grateful that I was a part of it.”

Leedham-Warner had not played competitively for over a year since GB’s attempt to qualify for the 2020 Olympics – giving birth to daughter Isla in March of this year.

After a cautious return, Leedham-Warner is getting back to speed and having an increasingly big impact on the court with averages of 15.4 points, 7.0 rebounds and 3.2 assists per game in five league appearances. The team’s leader in efficiency in EuroCup action hit the game-winner against Keltern in Germany as well as netting 25 points in the comeback effort in Belgium.

Leedham-Warner’s own comeback has certainly not been without its struggles, but the inner-motivation has never been stronger; spurred on by the bond of motherhood.

“Honestly, it’s been so hard,” the 34-year-old admits. “But it has tested me and pushed me to places I didn’t even know I could go. I’m finally starting to feel like the hard work is paying off and I am feeling more and more comfortable on the court.

“My mind moves wayyy faster than my body at times but I feel like I am slowly catching up. It’s crazy that if you just trust yourself and don’t give up, the things you can achieve are unbelievable. I am finally in a place where I don’t wake up every morning thinking I am completely crazy for doing this.

“It’s the hardest thing I have ever done, but I wanted to try, so I could see what I was personally capable of and I also wanted to try for my daughter.

“It was really important for me to show her that we can achieve anything we put our minds too when we work hard and put the effort in and believe in ourselves. Having her with me through this journey are memories I will cherish forever.”

The Lions made a statement in the summer by signing Leedham-Warner alongside fellow Olympian Azania Stewart with the duo’s experience proving invaluable for the team. An inspiration to many, Leedham-Warner’s presence alone has been a huge boost to the Lions.

“In my opinion, Jo Leedham is in the top three players of all time,” said head coach Mark Clark. “Just a great example to everyone.

“Lots of people can be Jo Leedham. The thing that makes Jo Leedham is her mentality, her desire, her work ethic as well as the ability to play the game. If you don’t learn from Jo Leedham, then that’s your choice and you’ve missed an opportunity.”

The WBBL is continuing to attract more talent to the league and having Leedham-Warner playing on these shores in the domestic league for the first time cannot be overstated. It is a scenario that even the Ellesmere Port native herself did not envisage, especially the success on the European stage with Leedham-Warner also giving praise to the Lions’ owners.

“No-one could’ve ever told me I would play with a British team period, let alone be making playoffs in EuroCup – it’s literally unbelievable what Lions have achieved.

“We have to give recognition to 777 for backing and supporting us, we obviously couldn’t be where we are without them. So thanks to them.

“I really hope it sparks and generates more funding in our sport as it shows that we really are making waves and competing amongst the best in Europe.”

It has been one achievement after another for the Lions this season and their journey has at least another chapter in the playoffs – and this one means that extra bit more for Leedham-Warner.