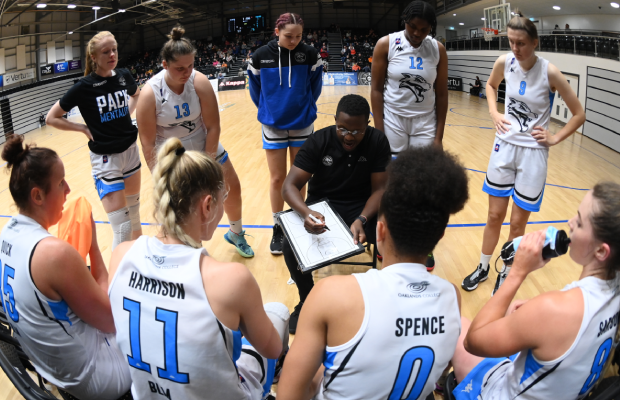 The first final of the 2021-22 WBBL season is now confirmed, while the top three sides in the league remain unbeaten.

Newcastle Eagles set up a Cup final showdown with London Lions, who maintained their unbeaten record alongside Sheffield Hatters and Sevenoaks Suns in league play.

London were back in domestic action following their rollercoaster ride of European qualification in the week and they pulled clear for a convincing 34-point home win against Nottingham. Jo Leedham-Warner and Cassie Breen netted 22 points apiece with Shanice Beckford-Norton adding 21 in the win.

Kennedy Leonard handed out 12 assists to close on the 300-mark in league play with London using a 35-19 second period to race away following an even start. The Lions host Oaklands on Friday afternoon before travelling north to play Durham on Saturday with a chance to extend their unbeaten record.

Double duty for the Suns and two more wins added to their league tally as they moved to 9-0 at the top of the WBBL Championship standings. The Suns eased to a 19-point home win over Cardiff before a dominant performance on the road saw them beat Manchester by 29 points to continue their impressive form.

Four players reached double figures in the win against Cardiff having led by as many as 34 with Jamila Thompson adding eight points to 11 rebounds, six assists and three steals. On Sunday, Renee Busch had the hot hand with six triples in a 22-point outing with Frankie Wurtz adding 18 points as the Suns now prepare for their next game at home to Leicester.

Helen Naylor played a starring role with 34 points to get the Hatters back on track with a hard-fought 14-point success away at Essex. Naylor knocked down six triples and recorded eight rebounds in the win with Ariona Gill scoring 16 points off the bench, while Georgia Gayle had 15.

Sheffield are still unbeaten in the league with more tests to follow as they welcome Newcastle on Saturday prior to another clash with London next week and they will hope to still be perfect heading into the contest.

Not to be for the defending champions. Leicester were aiming to become the first team to win back-to-back Cup titles, but their reign was ended at the semi-final stage as they came up short on the road against Newcastle. The Riders had moved ahead in the fourth before being undone by some of their former players in the loss.

They did bounce back in the league to move to 6-2 with a 15-point success against Durham behind a stellar double-double from Oceana Hamilton, who put up 21 points and 17 rebounds in the win. The Riders are back on the road away at Manchester on Saturday with the chance to consolidate their place in the top four.

Onto the final. The Eagles will face London in the Cup showdown after overcoming Leicester in a tense affair to win by five at home. Ebony Horton starred with 19 points with Jessica Eadsforth-Yates netting a big three late in the fourth as the duo helped inspire victory against their former side.

Chloe Gaynor contributed 12 points, six rebounds and three blocks with Newcastle holding their opponents to just six points in the final quarter. Chris Bunten’s side are back in league action this weekend as they take on Sheffield on the road before closing out 2021 with a trip to Gloucester.

The Rebels slipped to their second straight home loss as they fell back to .500 in the league with defeat to Sheffield. Angel Waithe led the way with 22 points and 12 rebounds as Essex were left to rue a costly second quarter as they were outscored 13-27 to go into half-time with a 14-point deficit – which would prove to be the final margin.

Ashleigh Munns hit four triples in 14-points personal with the Rebels now with a week off before returning to action with another home game against Gloucester as they look to close out the calendar year on the right note.

The Mystics dropped to 5-3 in the league as they suffered a heavy loss at the hands of Sevenoaks. They were in reach through the opening 10 minutes before being outscored 14-27 in the second as the game got away from them.

Georgia Jones joined Cat Carr in becoming the only players to reach 2000 points in the WBBL Championship and top scored with 13 alongside Erika Williams as Lauren Thomas-Johnson returned to action. Manchester host Leicester in another tricky encounter at home with the chance to climb back into the top four spots.

Nottingham made it back-to-back league wins with an emphatic home success over Gloucester before running out of steam on the road as they were beaten by London. Jahnae Gyles impressed against the Lions with 26 points with Kennedy Nicholas finding more success inside with 21 points and 14 rebounds.

Brooklyn Pannell had backed up a Player of the Month award for November with a game-high 24 points the previous day to open up December as the Wildcats never conceded more than 10 points in a quarter against the Queens. They are now inside the top eight spots and return to action next week with a trip to face Cardiff.

Big win for the Wolves as they claimed a six-point victory on the road in Scotland. Merissa Quick posted 13 points and 14 rebounds for the visitors with young guard Daisy Porter stepping up with 17 points, while Jocie Leavold hit a big three in the fourth as the duo took their WEABL form into the senior setup.

Oaklands double their win tally and keep in touch with the top eight in pursuit of the playoff spots. They face a daunting task on the road in London on Friday afternoon with another opportunity for their young contingent to go up against the best.

The Archers were unable to recover from a slow start as they trailed 22-8 after 10 minutes and were as many as 34 points behind in defeat against Sevenoaks. Stef Collins’ side produced a late rally to close the gap as they outscored the hosts 14-25 in the final quarter.

Lauren Saiki top scored with 24 points and had seven assists, while Shannon Hatch netted 18 points with the Archers hoping to take some momentum into their next game when they host Nottingham on the next weekend.

The Queens were dealt a major blow in the week as it was confirmed that Maura Fitzpatrick would miss the rest of the season due to a knee injury. The Ireland international was the league’s second leading scorer and a major presence for the new franchise.

Gloucester understandably struggled in Fitzpatrick’s absence again as they went down to a 48-point loss on the road to Nottingham as they managed just 34 points on 22% shooting. A weekend off follows before they face a tough double-header with encounters against Essex and Newcastle to bring their 2021 to a close.

Durham produced a battling display in going down to a 15-point loss away at Leicester. Lee Davie’s side were within seven early in the fourth after a 10-17 third quarter raised hopes of a fightback with Elle Hendershot leading the effort with 24 points, 16 rebounds, six assists, three steals and three blocks in defeat.

Jessica Wayne added a season-high 21 points with Katie Bennett posting 12 points and nine rebounds with the trio combining for 57 points as they all played the full 40 minutes. The Palatinates close out December’s action with back-to-back home games against London and Manchester.

Successive six-point defeats at home for Caledonia as they suffered their 10th loss on the season. Laken James netted 20 points with Taylor Edwards posting 17 points and 15 rebounds, but Maud Ranger was held scoreless on an 0-of-10 night as Pride were edged out by Oaklands.

The hosts were within two points at the midway point of the fourth, but a 10-2 run from the Wolves helped close out the win. Caledonia have shown improvements since the arrival of reinforcements and now have a lengthy break until returning to action in 2022 with a Trophy encounter with Essex.