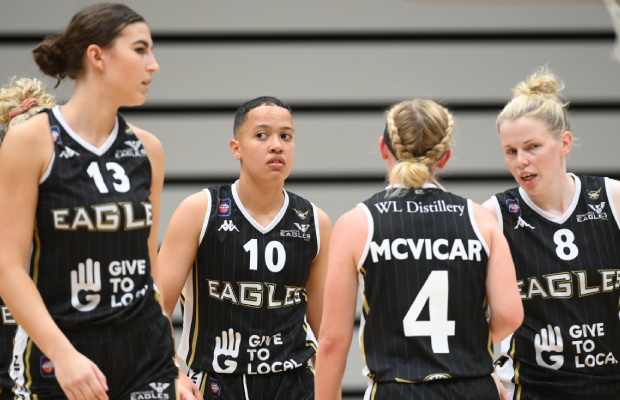 We’ve had the international break and the WBBL action resumed this weekend with the first Cup finalists confirmed.

London Lions booked their spot in the showpiece event, while Sevenoaks Suns and Sheffield Hatters moved to six wins from six in league play at the top of the league standings.

Emphatic. London moved into the final of the WBBL Cup for the first time with relative ease as they brushed aside close challengers Sheffield with a 34-point triumph on the road. Jo Leedham-Warner starred with a game-high 27 points with Shanice Beckford-Norton adding 21 points following a recent GB Senior debut.

The Lions inflicted a first loss on the season on the Hatters – even without Holly Winterburn and Cassie Breen – but they were beaten heavily themselves in Europe and face a battle to make the playoffs. But first, another league encounter as they make the trip north to take on a resurgent Newcastle Eagles.

The Suns made light work of temporarily claiming outright top spot in the league as they dismantled Durham in a 42-point home victory. Len Busch’s side were ruthless on the defensive end and held their opponents to less than 30 points including single digits in each of the four quarters.

Judit Fritz finished with 18 points, seven rebounds and three assists with Cat Carr adding a 17-9-6 stat-line, while Jamila Thompson also handed out six assists along with 11 rebounds. Sevenoaks have been boosted by the return of Janice Monakana and close out November’s action with a first visit to Gloucester.

Not quite the challenge Sheffield were hoping to give London as their Cup final hopes were dashed in emphatic fashion. The Hatters were undone by an 11-27 first quarter and there was no way back, though they have strengthened further with the signing of Hannah Shaw.

The GB international then played a leading role in Sheffield’s 20-point home win against Caledonia in the league with 22 points, while Georgia Gayle top scored with 26 as they bounced back to move to 6-0. They have this weekend off before an intriguing clash awaits with Essex on the road.

Another win for the Riders as they returned to action with a comfortable victory at home to Gloucester by 30 points. An all-round team effort was led by Oceana Hamilton’s 19 points, eight rebounds and three blocks with Hannah Robb also putting up 19 points along with seven boards and six dimes.

They also had some unwanted attention as Chelsea Jennings aired grievances about the club’s treatments in regards to a requested release. In more positive news, they got Brooklynn McAlear-Fanus back from injury and they will need to be on their game when they head to Essex on Sunday.

The Rebels keep rolling as they came up firing with a 30-point first quarter on their way to a convincing road victory over the Archers. Ashleigh Munns poured in 24 points to continue a red-hot streak from beyond the arc and minutes were spread throughout the roster as Essex continue to gel together.

Tom Sadler’s side now head into a key stretch of games as they follow up another encounter with Cardiff on Saturday by also welcoming Leicester and Sheffield as part of three home clashes in the space of a week.

Manchester moved to 5-2 in fourth place behind the trio of unbeaten teams as they managed to grind out a win over the youthful Oaklands side. They pulled clear in the fourth with a decisive 18-5 period to close out another victory and continue their momentum.

Erika Williams had another big game with a 25-point haul with a 14-point, 13-rebound double-double for Dom Allen, while Georgia Jones overcame shooting struggles to hand out 12 assists and collect five steals in the win. The Mystics are not in action this weekend before returning to welcome the high-flying Suns.

One win has become two win has become three wins for Chris Bunten’s side and 3-4 certainly looks a lot better than 0-4. The Eagles are hitting their stride and battled to a two-point road win in Nottingham, arguably their most impressive result of the season so far.

Jessica Eadsforth-Yates stepped up again with a WBBL career-best of 22 points including six triples with Chloe Gaynor also putting in work again with 11 rebounds and four blocks. Newcastle have benefited from having a healthy roster and will put their recent improvements to the test as they host London on Saturday.

Good news: Lauren Saiki has finally arrived in Cardiff and made an encouraging debut with eight points, six rebounds and three assists off the bench, while Sara Jorgensen also made a season bow with 4-4-4 as the Archers finally get a boost in the back-court. Also, Shannon Hatch stays in impressive form with another double-double of 23 points and 11 rebounds against Essex.

Bad news: No other player hit double figures and Stef Collins’ side suffered a 28-point home loss. They were left to rue a slow start as the Rebels raced clear to lead 10-30 after 10 minutes. The Archers now drop to 2-5 in the league with a repeat clash at Essex with key pieces back in the lineup for a brighter outlook.

The talent is clearly there, but not quite translating to results at the moment for the Wildcats as they still just have a solitary victory from eight games in all competitions. Their latest defeat saw them edged out at home by Newcastle in a low-scoring tussle having led inside the fourth, though they were held to 31% shooting.

Brooklyn Pannell and Jahnae Gyles combined for 39 of the 62 points for the Wildcats with Kennedy Nicholas pulling down 16 boards in the loss as they now look to bounce back away at Caledonia, who also have one league win to their name.

After over a month of not being in action, the Queens were back on court as they took on Leicester on the road. However, they were without Maura Fitzpatrick – who recently made a senior debut with Ireland’s national team in the international window.

Marlee Ball top scored with 20 points, but Gloucester were outscored 25-5 in the second quarter on their way to a 30-point loss to drop below .500. They remain amongst the top eight in the league standings with tougher challenges on their way with Sevenoaks their next opponents on Saturday.

Another defeat, but another lesson for the young Wolves amid another encouraging display on the road at Manchester. Lauren Milligan’s charges were right in the contest through three quarters, but fell away late on as they were held to just five points in the final 10 minutes to fall to a 16-point defeat.

But without Lizzy Harrison and Greeta Uprus, the Wolves showed fight at both ends with Kizzy Spence netting four triples in a team-high of 14 points with Beth Sarson logging heavy duty with 12 points, seven rebounds and three assists in 38 minutes. Next up for the Wolves will now be a trip to face Caledonia.

[UPDATE: This game has been postponed]

Reinforcements continue to arrive for the Pride with Erin McGarrachan making a debut last week, while American Laken James has also signed to join compatriot Taylor Edwards as the trio bolster a young squad in a bid to change their fortunes.

Edwards was also on triple-double watch with 16 points, nine rebounds and nine assists as Pride competed on the road with Sheffield before going down to a 20-point loss. Three other players were in double figures with Maud Ranger posting 12 points and 10 rebounds as they now return home to take on Nottingham.

🚨 ANNOUNCEMENT@lakenjames5 signs to complete Pride team for the 21/22 @WBBLofficial season.

Durham trailed 9-6 after 10 minutes against Sevenoaks, but things quickly got away from them as they were held to just 29 points in a heavy loss on the road. The visitors finished at 20% shooting from the floor with Elle Hendershot still putting up 10 points, six rebounds, four assists, four steals and three blocks.

The Palatinates are amongst a group of four teams with just one win and will now have the upcoming weekend off before their next game away at Leicester with London to follow in a tough stretch to open up December’s action.

[UPDATE: This game has been postponed.]