London Lions suffer heavy loss on the road in Brno 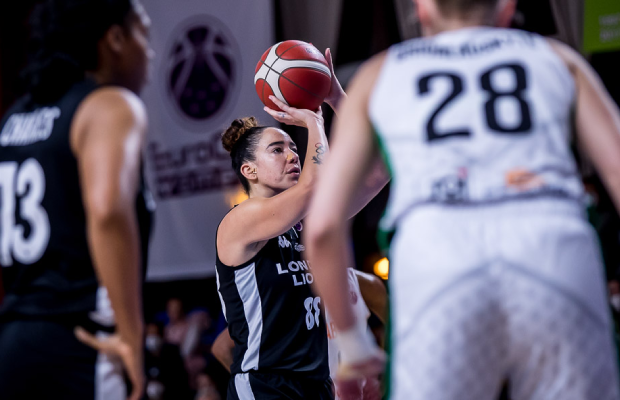 London Lions returned to EuroCup action with a heavy 68-41 defeat on the road against Zabiny Brno, on Wednesday evening, in their penultimate regular season fixture.

Mark Clark’s side drop to a 2-3 record in Group K with the margin of defeat denting their chances of making it through to the playoffs as they finish away at Belgian leaders Castors Braine next week.

Just days after beating Sheffield Hatters by 34 points in domestic action, this result served as a reminder of the level of this competition and the achievements of the Lions to date.

The hosts set the tone early on with an 8-0 opening and it took the Lions almost five minutes to get onto the scoresheet, as they did through Jo Leedham-Warner – who started in the absence of Holly Winterburn.

Zabiny Brno soon led 15-2 and the gap increased to 18 points after 10 minutes with the visitors left ruing a slow start as they were 2-of-17 from the field with seven fouls and six turnovers in the first quarter.

The Lions surpassed their points total inside three minutes of the second period in a bright stretch that included a tough finish from Steph Umeh. However, their opponents continued to find a way to score inside and their commanding advantage had only been reduced by a single point as they went into half-time 41-27 ahead.

Any hopes of a comeback was soon ended in the third as the Lions again struggled to put points on the board and were outscored 16-5 in the quarter to fall 30 points behind.

Shanice Beckford-Norton fouled out midway through the fourth, but still top scored with 13 points along with four rebounds and four steals, while Azania Stewart collected 13 rebounds to go with five points.

If Castors Braine win on Thursday, the Lions can no longer finish in the top two in the group. This would leave one of the four third-placed spots from Conference 2 (Groups G-L) with the Lions now 2-3 (-33) with points differential likely to be a determining factor.