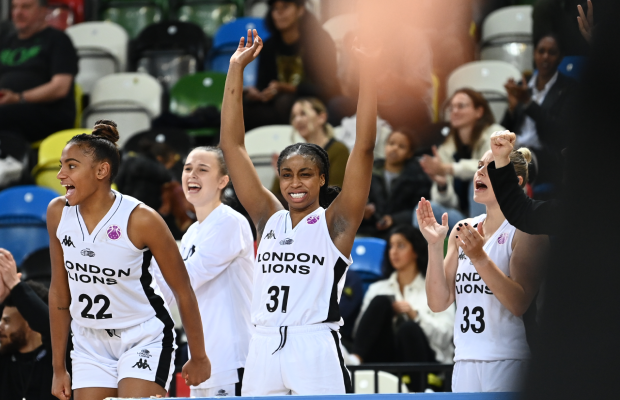 Minimal change in our WBBL rankings this week with the top four sides all winning as part of a five-game weekend.

The Lions, Hatters and Suns all remain unbeaten in the league and look capable of pulling away from the rest of the pack, while the Eagles still await their first league victory.

London are still perfect in domestic competitions as they put a midweek European defeat behind them in emphatic style as they ran riot in a 66-point win at home to Gloucester. The victory included a run of 48 unanswered points with seven players in double figures.

Kennedy Leonard set a new league record with 22 assists to go with 16 points, while Cassie Breen and Shanice Beckford-Norton both had 20+ point games off the bench. Jo Leedham-Warner was highly influential with 12 points, 12 rebounds, five assists and four steals with Azania Stewart resting and Holly Winterburn limited to 10 minutes after taking a knock. A trip to Cardiff follows their latest European encounter.

The Suns recovered from a slow start away at Oaklands to continue their unbeaten start to the league campaign. Len Busch’s side were held to just seven points in the first quarter before taking over the contest to outscore their opponents 45-21 in the middle periods.

Renee Busch top scored with a game-high 23 points, while Cat Carr had another near triple-double with 16-15-9 and Julia Koppl posted 15 points and 13 rebounds as the Suns dealt with the absence of Jamila Thompson. The reigning league champions return home this weekend as they take on Nottingham with a key battle inside with Kennedy Nicholas pending.

Another testing road encounter that the Hatters have come through to keep pace at the top of the Championship standings. It was an all-round team performance as Sheffield did a good job inside to contain the threat of Kennedy Nicholas – who went 1-of-8 from the field – and limit their outside shooting.

Helen Naylor led the way with 17 points and 10 rebounds with Becca Cardenas adding 16 points along with seven boards and three steals in the win. The Hatters can move to 5-0 in the league if they overcome Oaklands in their latest home game on Saturday.

The Riders did indeed bounce back, but did it the hard way as Hannah Robb came up huge in another come-from-behind league win. The GB guard finished with a 23-8-5 stat-line with critical plays for the Riders in their eight-point road win at Newcastle – without Brooklynn McAlear-Fanus and Chelsea Jennings.

Louise Rouse hit a couple of big threes in an 8-0 run at the start of the fourth as the visitors rallied to take the win. The club announced on Tuesday that Marg Jones will take over as head coach with Derrick Washington departing ahead of their next encounter with Caledonia with a chance to improve to a winning record.

Make that three on the bounce for the Mystics and the impact of Erika Williams is already being felt with the American coming up big from outside down the stretch in their win over Cardiff. In a back-and-forth tussle, the home side put together a 14-4 close to take the victory with key baskets from Vanessa Akra, too.

Georgia Jones was 1-of-13 from three-point range, but top scored with 22 points with Lauren Thomas-Johnson out of action for the Mystics. Williams added 20 points with Dom Allen collecting 13 rebounds in a tough battle on the boards. Manchester look for four straight wins when they head to Essex on Saturday.

The Archers were in a decent position to move to 3-1 in league play before they were undone in the closing few minutes of their game at Manchester. Shannon Hatch had another big game with 23 points, 13 rebounds and six assists with Kim Kheing adding 22 points in the seven-point defeat on the road.

Cardiff have a 4-3 record on the season having not seen a minute of either Sara Jorgensen or summer signing Lauren Saiki. They are back at home on Sunday as the high-flying Lions visit before a trip to Newcastle completes their schedule this side of the international break.

Things started reasonably well and then got out of hand very quickly on Gloucester’s trip to Barking Abbey on Sunday. It’s probably best not to over-analyse such a loss, but they do have a long break ahead before they return to action and it’s a reminder of the early stage they are into the process.

25 turnovers were as much of London’s doing as they were their own errors and such a long scoreless streak (48-0) is as tough as it comes. After the international break, they head to Leicester before hosting Sevenoaks the following week as a difficult run of games continues.

Shaunay Edmonds fired in 27 points on 63% shooting from the floor, but there was little offensive support elsewhere with Brooklyn Pannell the only other player in double figures with 12 points. The Wildcats faced a double-digit deficit after 10 minutes and never recovered, though they were better in the second half.

Nottingham went 2-of-13 from downtown and were also 50% from the foul line in their second league defeat of the campaign. Kenrick Liburd’s side face another unbeaten side on Saturday as they take on Sevenoaks to round out the October action.

Essex return to action this weekend as they look to end their losing start following a tough run of games to start the season. Their next opponents are the Mystics, who have found form of their own of late and the Rebels will look to signal their intentions moving forward.

Four losses on the bounce for the Eagles, despite an improved display at home to Leicester. Chris Bunten’s side led by as many as 14 before going down in an eight-point loss as they were outscored 13-25 in the final quarter.

Ebony Horton top scored again with 17 points, while Chloe Gaynor recorded a first double-double with 15 points and 15 rebounds with the Eagles also boosted by the league debut of Spanish captain Marina Fernandez. Up next for Newcastle is a short trip to take on Durham having already beaten them in the Cup earlier this season.

It was a first double-double in 50+ league appearances – playing 25+ mins in a game for only the third time.

Oaklands made a bright start defensively; holding Sevenoaks to just seven points as they moved into an early lead. However, it was always going to be a tough ask to continue to contain their firepower and their own offence was unable to match the output in a 25-point defeat.

Merissa Quick had an 11-point, 10-rebound double-double with Lizzy Harrison also netting 11 points with Oaklands dropping to 1-6 on the season. They head on the road to take on Sheffield this weekend in their final game before the international break.

Durham were another team out of action this past weekend and will be looking at a winning return as they welcome Newcastle in a North-East battle on Saturday. The two teams met in the Cup with the Eagles enjoying a big win, though it’s the Palatinates with a win to their name so far in league play.

Caledonia return to action this weekend as they travel to face Leicester on Saturday to close out the month. November doesn’t get any easier, either. Sevenoaks at home followed with games against Sheffield and Nottingham in a tough spell.