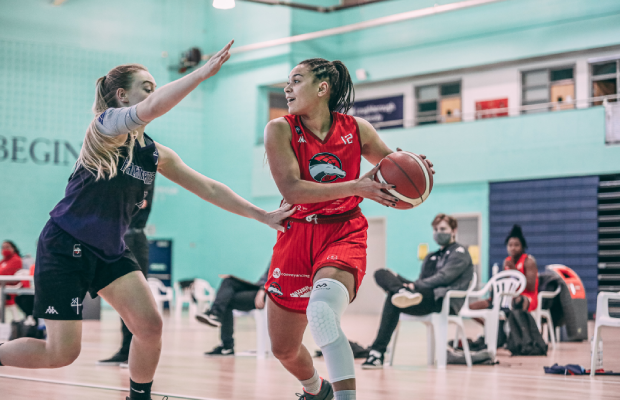 Advantage Suns in the title race as the WBBL Championship standings begin to split across four separate battles.

Leicester Riders and London Lions remain ahead of Sevenoaks in terms of wins, while three teams are battling for fourth, three further teams competing for what appears to be two playoff spots with the bottom two sides needing a run of results to state their case.

10 and 0. The Suns are really charging as they hit the halfway mark of their campaign, which just goes to show the level of the challenge that faces them inside the final month of the regular season. Len Busch’s side backed up a win on the road in Nottingham by beating London to secure the all-important head-to-head – overturning double-digit deficits in both.

Ta’Yani Clark led the way in the pivotal victory with 22 points as Cat Carr added 13 points, nine rebounds and 13 assists as they pulled away in the second half with all six scorers in double figures. On Friday, they kept the Wildcats to just 16 points in the second half to take the win with Carr finishing with a 19-9-7 line.

Tough loss again for the Lions. Cassie Breen caught fire in the fourth, but the barrage kept coming from Sevenoaks as they made big play after big play to get the win. A historic league title is now out of their hands, but London will no doubt be targeting six wins to keep up the pressure for any late twists.

The Trophy winners had enjoyed a convincing 21-point win at home to Essex on Friday with Shanice Beckford-Norton firing on all cylinders with 28 points to lead the way. Breen had 21 in the loss to Sevenoaks with the hosts having led by as many as 10 points in the first half. Two road trips are up next.

Since losing two games on the same weekend, the Riders have quietly gone about re-building their momentum and are looking a strong threat once again after taking their winning run to six games – moving into top spot in the official standings.

They still have Sevenoaks and London (x2) to come in their final seven, but Leicester keep taking care of business. First, they defeated Cardiff by 25 on the road and then eased to a 43-point home win against Durham as Holly Winterburn poured in 27 points, including five triples.

Nottingham held a 10-point lead over Sevenoaks during the first half of Friday’s clash, but they didn’t have enough to hold on as the visitors put the clamps on in the final 20 minutes. But, more encouragement for the Trophy finalists given they are without star Jasmine Joyner for the rest of the season.

Tia Freeman provided the spark with an early scoring spree with Praise Egharevba continuing to provide solid contributions in the paint. It may have been a different outcome with a 2-of-15 shooting afternoon from three not helping their cause and they welcome Manchester on Wednesday with both sides hunting down fourth.

Two wins would have been expected when facing the bottom two sides, but the competitiveness of the league was on display again as Manchester had to come through two tough battles. They held off Durham for a six-point before needing a late score to outlast Caledonia on the road.

Nicolette Fong Lyew Quee came up with the crucial go-ahead score inside the final minute to close on a 1000-point milestone with Hannah Shaw leading all scorers with 18 points. Georgia Jones fired in 22 against Pride in midweek to help her side do enough to edge away in the second half to boost their top four hopes.

Essex have now fallen to four consecutive defeats as they face a battle to hold onto their spot amongst the top four. They went down by 21 points away at London before a disappointing display saw them beaten by 13 against Newcastle with the teams behind them closing in.

The Rebels’ red-hot shooting that propelled them to an impressive 8-2 start in the league has cooled in recent weeks and they were under 25% from three-point range in both weekend losses. They rued costly third periods in both games and face another road test when they take on the Mystics on Saturday.

The Eagles made their move with a big home win over Essex to climb above Oaklands and Cardiff to gain the upper-hand in the race for the playoffs. Chris Bunten’s side have the fewest number of games left, but have the extra win on the board with momentum on their side.

Newcastle used a 17-8 third period to pull clear from the Rebels with Alison Gorrell top scoring with 18 points. Orieoma Chukwu-Etu was +24 on the floor in the win, while Deborah Rodriguez-Perez tallied four points, 10 rebounds and five assists as both played important roles. A big double-header is up next with a trip to Durham before hosting Oaklands on Sunday.

Way back last Monday morning after a bad Sunday loss I said it would be a POSITIVE week!#HawayTheLasses proved it 👏🙌🔥

No action for the Wolves this past week as their double-header was postponed. They are scheduled to host Sevenoaks on Thursday before making the trip to face Newcastle at the weekend in a huge clash for the top-eight battle.

Cardiff were undone by a 13-29 first quarter at home to Leicester as there was no way back into the contest. Shannon Hatch posted a double-double of 17 points and 13 rebounds with Robyn Lewis handing out nine assists against one of her former WBBL sides.

Still without Mara Marchizotti, the Archers will be keen for the Argentine’s return for their run-in that continues with home-and-away matchups with Sevenoaks this weekend. Every win becomes precious at this stage and they are now left chasing Newcastle even with two games in hand.

Durham are still rock bottom with just a single win to their name, but their improved performances have continued as they pushed Manchester close on the road in midweek. An emphatic loss to Leicester followed at the weekend with Lee Davie’s side still three wins adrift of the top eight.

Kara Elderkin played the full 40 minutes against the Mystics with 19 points as they kept it close throughout – briefly trailing by 10. They ran out of steam on the road against the Riders, who showed no mercy with a 35-9 final period with the return fixture taking place on Wednesday in the North-East.

Pride came close to a third league success as they battled back to tie their home game against Manchester at the weekend before falling short. Sian Phillips had another big game with 12 points, 12 rebounds and five assists with Maud Ranger also posting a double-double.

Ella Doherty top scored with 14 points with the hosts never leading by more than three in the contest as a late 6-0 burst set up a tense finale. The Scottish side still have an outside shot at making the playoffs with need a string of results – far from an easy task, particularly when London and Sevenoaks are next on the schedule.