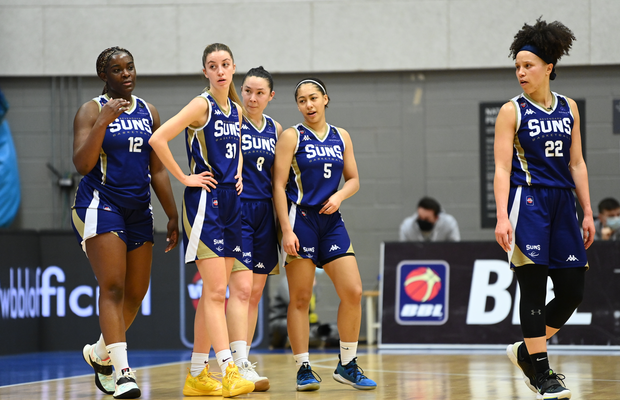 Two different winners of silverware this season with a third the only remaining unbeaten side in the league.

London Lions secured club history by claiming the Trophy title in a week where they also suffered a first defeat in the Championship as Sevenoaks Suns close on top spot.

The Lions may have seen their perfect league record ended, but put it to one side as they made history with a convincing display to clinch a first title in the WBBL with a 32-point Trophy victory. Mark Clark’s side then moved to 9-1 with another dominant performance as they impressed in beating Manchester on the road.

There was little to separate the two unbeaten teams last Wednesday and it came down to a play here or there down the stretch. Kennedy Leonard then led the Trophy triumph as MVP with a 21-6-9-7 line with Cassie Breen putting up 25 points before another team-high 21 in Tuesday’s win as Paige Robinson posted a first double-double in the WBBL with 12 points and 16 rebounds.

Here comes the Suns. Cat Carr came up with the decisive score to secure a win over the Lions in an unbeaten clash last Wednesday, which would spark a run of three straight league wins as Sevenoaks made their charge.

Carr had 24-5-6 in the full 40 minutes of the three-point win over London before a 29-point haul against Essex as the defence held their opponents to 28% shooting. The Suns had six players with at least nine points as they battled past Newcastle at home and they are now the front-runners in the title race, despite sitting fourth with games in hand.

No action this past week for the Riders as they can continue to work on embedding their new recruits. The Cup champs return to the court for a double-header at home as Manchester and Newcastle make the trip at the weekend.

High fives all round for the Rebels as they continued their winning run to move to 8-2 – the same number of league wins they had managed in 39 games in their first two seasons. The run did come to an end at the weekend as they were beaten by 12 by the Suns in an ‘away’ fixture on their home floor.

Angel Waithe posted a huge double-double of 26 points and 18 rebounds away at Cardiff, but it was a collective struggle against the stifling defence of Sevenoaks with 26% shooting inside as they were held to 52 points. A trip to Oaklands is up next as they remain firmly amongst the top four.

Losing in a final is never something you want to go through, especially when you lose by 32 points and see your star player go down to a potentially serious injury. However, credit to the Wildcats for the way they stepped up in the absence of Jasmine Joyner and refused to lie down in the face of a 30-point half-time deficit.

German junior international Praise Egharevba in particular stepped up with 11 points and 10 rebounds, while Chelsey Shumpert poured in 27 points in taking on the primary scoring responsibility. Nottingham don’t have too long to ponder their final woes with a chance to get straight back to winning ways in the league as they visit Caledonia.

Two dominant home wins were followed by a heavy defeat at the hands of the league-leading Lions on Tuesday evening. The Mystics now join Nottingham on a 5-5 record through 10 games as they had enjoyed victories over Oaklands and Cardiff to keep those sides at bay in the league standings.

Georgia Jones and Helen Naylor were the two leading scorers in each of the two wins with a combined 39 points against Cardiff as the hosts pulled clear in the fourth quarter. However, they had too much to make up against London after a 16-32 opening period and next face Leicester on the road at the weekend.

The run may have come to an end for the Eagles at the weekend, but make no mistake there were plenty of positives to take from a ninth defeat. Chris Bunten’s side gave Sevenoaks a real test on the road with a 22-14 second quarter ultimately proving the difference, though they kept pace in the second half.

Maddy McVicar posted 24 points and 10 rebounds in the loss with a further 23 points from Alison Gorrell, while Abby Lowe recovered from an early injury scare as one of several players to slip on the surface. Newcastle have seven games left and have another chance to show their progression as they take on Leicester on Sunday having been held to just 39 points in their last encounter.

Also becomes the second player – after @helennay9 – to score 300+ points in a league campaign on four separate occasions.#BritishBasketball pic.twitter.com/XCHXW1uAlt

Oaklands were able to put a 29-point loss in midweek behind them as they battled to a five-point win on the road against Durham. Greeta Uprus and Dorka Boros combined for 34 points in the win as the visitors’ defence stood firm down the stretch to secure their third league success.

The Wolves were also able to welcome back Lizzy Harrison for the weekend clash having been short of numbers away at Manchester as they were held to just 51 points in a tough encounter. Oaklands remain half a game behind in the battle for a top eight spot and they host Essex at the weekend.

Cardiff had made a bright start in their eventual five-point loss to Essex last Wednesday and were in the game against Manchester through three quarters before a 22-7 final period saw their opponents pull clear.

Marlee Ball had 18 points against the Rebels as the home side had led 24-20 after the opening 10 minutes. It was Cristina Bigica who carried the scoring load at the weekend with a game-high of 27 points, but it would prove to be in a losing effort as her side dropped to 3-7 ahead of games with Durham and London.

A first win of the season came at the 10th attempt for Lee Davie’s side. It had been coming after they pushed Oaklands close in midweek before pulling away late on for a seven-point victory on the road against Caledonia.

Kara Elderkin pulled down 16 rebounds to go with 12 points, while Goretti Hurtado Barbeito top scored with 15 points to back up a season-high of 18 points in the loss to Oaklands at home. The Palatinates are up and running and will be hoping one can become two on Wednesday as they host Cardiff.

The Pride have hit the halfway mark of their campaign with just two league wins with their losing run extending to five games in a row as they were beaten at home to Durham on Sunday.

Ella Doherty top scored with 17 points in a topsy-turvy encounter in which Caledonia got off to a slow start with an 8-17 opening period. They were within two points approaching the final minute, but fell to a seven-point defeat to remain a win behind in the race for the playoffs.