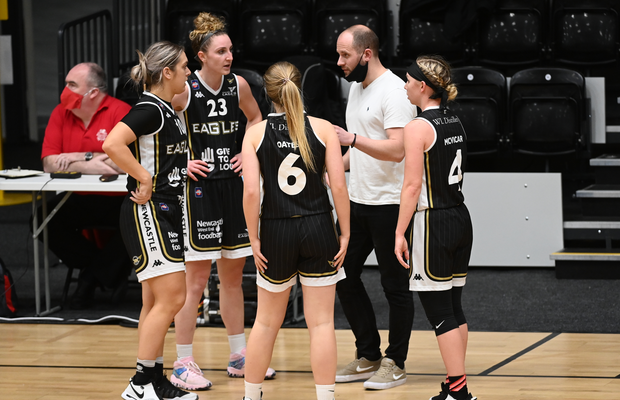 Two teams remain unbeaten in the league ahead of a midweek showdown, while the WBBL Trophy final matchup has been confirmed.

BA London Lions continue to lead the way in the Championship standings with a first piece of silverware in their WBBL history up for grabs against Nottingham Wildcats at the weekend.

A huge week awaits for the club with an unbeaten league clash away at Sevenoaks on Wednesday before vying for their first WBBL title on Sunday when they meet Nottingham for a third time in 2021.

The Lions were in cruise control on their way to a dominant win against Cardiff in midweek as Cassie Breen led the way with 22 points. They were given a sterner test by Oaklands on Saturday, but pulled clear for a 20-point win to move to 8-0 behind a 24-point haul from Shanice Beckford-Norton.

Two wins this past week to keep up the pressure on top spot as the Riders put their recent losses behind them to bounce back against Manchester and Cardiff, although both were closer than the final scores suggest – with fourth quarter defence stepping up.

Leicester outscored the Mystics 7-27 in the final quarter in midweek as Holly Winterburn was an assist away from a triple-double with a 17-13-9 line in the win. They then needed a 7-0 close to see off Cardiff in the latter stages on Saturday with Amber Smith netting 21 points, while Hannah Robb added an important 17.

Technically they’re still fifth in the standings, but with games in hand, the Suns are looking strong again as they maintained their 100% league record from four outings with a clinical display on the road against Durham at the weekend.

Renee Busch set the tone for the team’s red-hot start from the three-point line, finishing with seven triples in a 21-point haul, while Portuguese international Lavinia Da Silva tallied another double-double with 15 points and 13 rebounds. Onto a big game at home to the league-leading Lions on Wednesday lunchtime.

The Rebels enjoyed a winning start to their run of games on the road, albeit their victory over Caledonia did not see them at their convincing best. They racked up 26 turnovers in the contest and their outside shooting was down at 29%, but they kept their opponents to 29% overall shooting and did enough to come through.

Andrea Kohlhaas and Ashleigh Munns combined for 37 points to help propel Essex to a fourth straight victory as they move to 7-2 to keep themselves in contention at the top. They continue their travels this week with trips to Cardiff and Sevenoaks.

Another final awaits the Wildcats after a dominant second-half display ensured they overcame Manchester Met Mystics for a 15-point victory in Saturday’s semi-final.

Nottingham had conceded 33 points in the second quarter, but only let up 24 points in the entire second half with Jasmine Joyner leading the way with 24 points and 15 rebounds, while Simone Costa and Chelsey Shumpert both added 19 points. They were runners-up in the inaugural final and face London on Sunday.

FEATURE – Chloe Gaynor: People told me to quit, but I wasn’t ready to give up

Not to be for the Mystics. Georgia Jones put up 26 points in a spirited 40-minute effort having helped lead her side to a four-point advantage going into the half-time break.

However, they were outscored 24-43 in the next 20 minutes to see their hopes of the final diminish. Manchester had also dropped to 3-4 in midweek as they fell away late on in a 17-point home loss to Leicester – they’re back in action on Wednesday as they host Oaklands before taking on Cardiff.

Make that three wins in a row for the Eagles. Chris Bunten’s side streaked clear in the second half as they outscored Caledonia 40-14 on their way to a convincing success – moving into the top-six, despite playing more games than any other side.

Wins are on the board, though, and confidence is growing with Abby Lowe enjoying a purple patch in scoring with another 17 points this weekend to add support to Alison Gorrell’s 30-7-9 line in continuing her remarkable season. A trip to Sevenoaks presents a big roadblock in the way of their winning run.

At 45-42 behind with 5:52 left in the third, the Wolves were right in the contest against the league leaders, despite only seeing three minutes of action from Amari Carter because of injury. However, they would go on to lose by 20 points with Greeta Uprus leading the resistance with 20 points of her own.

The Wolves still await the returns of absent starters as they drop to a 2-7 record alongside Caledonia, outside of the playoff places. They head to Manchester in midweek before a trip to Durham completes their double-header on the road.

It was always going to be a tough double-header for Cardiff against the top two sides, but they were right in the contest away at Leicester until the final minute after being blown out on the road in London.

The Archers were outscored 47-15 in the middle periods in their midweek clash and despite doubling up on their opponents in the fourth, it was still a 33-point defeat. It was a contrasting back-and-forth clash with the Riders, but they were held to eight points in the final period with a 7-0 close seeing the hosts stretch clear.

Marlee Ball posted 17 points and 14 rebounds, while Mara Marchizotti had 18 points and it will be something for Cardiff to build upon with games against Essex and Manchester to come this week.

Two more defeats at the weekend extended Caledonia’s losing run to four games as they remain on the outside of the playoff spots with back-to-back losses coming against Essex and Newcastle.

Maud Ranger had a huge 23 points, 16 rebounds and five assists at home on Saturday, but Pride never led in the contest and fell to an eight-point loss after winning the final quarter. The following day on the road, the Scottish side ran out of steam in the second half as they managed just 14 points in falling to a heavy defeat to the Eagles, who they now trail by two wins with three games in hand.

Durham simply could not contain Sevenoaks from the perimeter in the opening 15 minutes of their home encounter and it was always going to be a struggle clawing back an early deficit.

The home side did have some joy after the break with 9-0 and 11-4 runs in an improved third quarter effort, but were held to just 10 points in the final period. Kara Elderkin top scored with 19 points with Jazmin Gyulai adding 12 points from the bench with Durham next facing Oaklands and Caledonia over the weekend.