Chloe Gaynor: People told me to quit, but I wasn’t ready to give up - Hoopsfix.com

Support
Home / Features / Chloe Gaynor: People told me to quit, but I wasn’t ready to give up

Chloe Gaynor: People told me to quit, but I wasn’t ready to give up 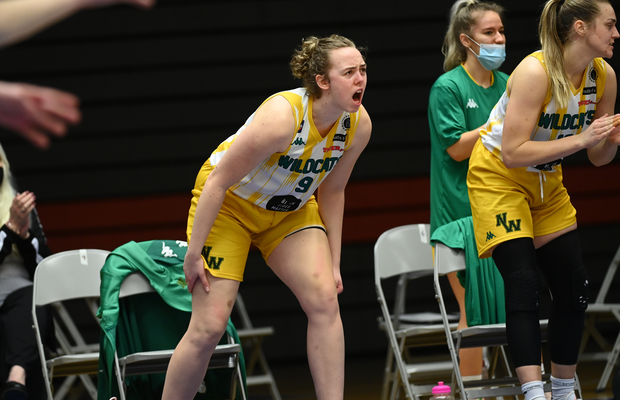 Chloe Gaynor is finally back playing basketball after enduring a torrid time with injuries during college in America.

The 22-year-old saw less than 32 minutes of court time in three years at Long Beach State, but can now look forward to competing in a WBBL final with Nottingham Wildcats on Sunday.

Gaynor’s time at LBS started with almost immediate pain with what turned out to be a torn tendon suffered in one of the first practices in California. After redshirting her freshman year, issues remained and more tears were discovered leading to a long battle on the road to recovery.

Over two years after enrolling, Gaynor finally made her debut in November, 2019 with a run of four appearances in the team before another lengthy absence ensued as a result of the persistent troubles.

“College was really difficult for me,” Gaynor told Hoopsfix. “Being injured for my entire college career was really hard, especially mentally.

“As athletes, we are taught to be mentally tough, and I consider myself to be that, but no doubt it was the hardest thing I’ve been through. It’s something no-one really talks about anyway and to top it off, you’re away from home, in pain, and you can’t do the thing you love.

“I had a lot of people questioning me and telling me to quit, but ultimately I wasn’t ready to give up.”

Gaynor underwent surgery last July, and while things are looking on the up, caution remains with the 1998-born centre grateful to the medical staff that aided her rehab.

“It’s always something that I have to deal with and maintain, but I’m really lucky to have had the medical staff I did during college, because there is no way I’d be playing now without them.

“I’m feeling really good – I think I’m finally in a place where I’m confident again in my body and I can really put in work to become a better basketball player.

“It’s awesome to be back home playing and seeing how much the game has developed over here. We have so much talent across the country and I’m grateful to witness it week in, week out.”

Gaynor returned home to join the Wildcats in what is a third season in the WBBL having been at Barking Abbey prior to a move stateside. The move comes with a sense of familiarity, too, with Nottingham’s Kenrick Liburd and Karen Burton also part of the BA programme during Gaynor’s time at the club.

A league debut came at the age of 17 during the 2015-16 campaign with Gaynor closing out the regular season with bests of 13 points and eight rebounds against Cardiff Met Archers.

“I learnt so much at BA,” she recalls. “It’s funny being at Nottingham with Kenrick and Karen now, because we were all at BA together and talk about our time there often and it brings up more memories.

“Mark [Clark] taught me a lot during my time at BA – he helped not only my skill set, but my basketball IQ. Whether it was adjusting my technique on my shot, or sending me EuroLeague players to study and learn from, he made sure I improved my whole game.

“It is nice to see BA be successful again and get back to a final.” Of course, Gaynor is also no stranger to competing in the WBBL Trophy final having been part of that BA squad that reached its first showpiece event in the league in 2016.

Barking Abbey – who also had Newcastle’s Abby Lowe and GB’s Savannah Wilkinson on the roster that day – were beaten convincingly by Sheffield Hatters as they lost 79-45 at Arena Birmingham, prior to the men’s BBL Cup final.

“I remember quite a lot from that day actually,” said Gaynor. “It was a really great experience for me, it was the first time I’d been to any finals and it was quite a big deal.

“We were really lucky as a team to have great seniors such as Diana [Naydenova-Goryanova], Tereza [Brantlova] and Abiola [Wabara] be there and share their experiences with us.

“I remember Abiola telling us about her experiences with Baylor before we were about to enter onto the court, because a few of us younger ones were definitely nervous at the fact we were playing in a big arena and there were a few more people in the audience than we were used to playing in front of.

“Diana and Tereza were telling us their experiences of playing in Europe and how they handled the big games and it is knowledge and information I still carry with me.

“It didn’t go our way, but for our team to get to a Trophy final with the majority of us all being youth players was a great achievement and something I’m very proud of.”

While unsuccessful that day, Gaynor did enjoy junior success with BA that same season having been MVP during their WEABL Championship victory against Charnwood with 16 points, seven rebounds, three steals and two blocks.

Now with Nottingham, Gaynor is holding onto the feeling of playing again. With averages of 7.4 minutes per game in the league as part of the Wildcats’ extended depth this season, a best of six points and five rebounds came against Essex Rebels, in January.

But stats and numbers are insignificant. Gaynor knows all too well what it’s like to not even have the chance to play the sport and understands the importance of being a better team-mate, whilst being a constant source of energy on-and-off the court.

“I’m so grateful that we’ve still had the opportunity to do what we love throughout,” Gaynor said of the challenging season. “This season has been about getting myself back into playing again after struggling with injuries and really trying to find myself again on the basketball court.

“I’m getting more confident and just loving every minute that I get to spend on the floor with the team.

“I’ve learnt over the past couple of years that there are ways to impact the game other than the time you are actually on court.

“I think a major part of my role on this team is making sure that our energy is high and we maintain that throughout the game.”

The Wildcats have a 5-5 league record so far this season and also made it to the semi-finals of the Cup. They ensured they went at least one step further in the Trophy with a 75-90 victory away at Manchester Met Mystics securing their place in the final of the competition for a second time.

“We’ve faced a lot of adversity this season and we’ve worked really hard to get ourselves in this position, so very proud,” said Gaynor.

“As a team, we’re very excited at the opportunity to compete for silverware, it’s been something we’ve been talking about all season, so to now be at that point where we get to play for the trophy this weekend is really exciting for us.

On the final, she added: “We’re two very competitive teams and it is the Trophy Final so it is bound to be a great game to be part of, and to watch as well.

“I’m looking forward to being back at a final and couldn’t wish for a better group of people to be out there fighting for a trophy with.”

You can watch Sunday’s WBBL Trophy final LIVE on Sky Sports from 3pm.