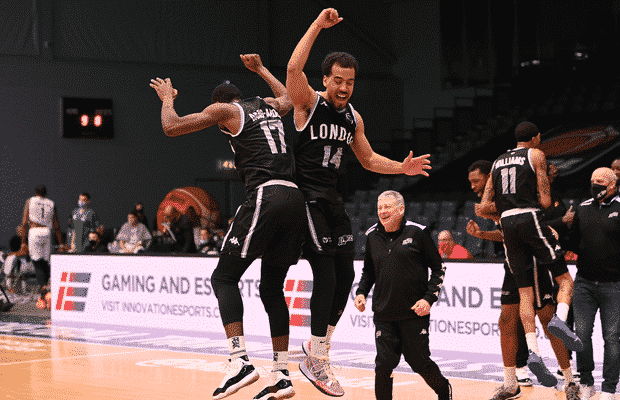 The second piece of silverware of the season was decided on Sunday to highlight a quieter week of action around the league.

Another win, another step closer to another league title for the Riders. They were pushed all the way by Surrey in midweek as they came away with a three-point victory at the Morningside Arena to maintain their charge with a 17th win in 20 outings.

Darien Nelson-Henry posted 21 points and 12 rebounds, Geno Crandall handed out 10 assists to go with 20 points and William Lee had 15 points and 16 boards as the trio all posted double-doubles. Just 10 games remain, starting with a home game against an in-form Cheshire side on Wednesday.

Deserved silverware for Vince Macaulay’s side. The Lions put aside any demons from the Cup final loss with a six-point win over Plymouth having taken control to build a 16-point advantage at the half-time break.

They handled the fightback from the Raiders by keeping them at bay and were led to a Trophy triumph by the MVP efforts of DeAndre Liggins, who finished with a 19-7-8-5 line, while Dirk Williams had 20 points. The Lions are still in the title race, but cannot afford to add to their loss column – starting with their trip to Newcastle on Friday night.

Their wait for silverware has to wait a little while longer, at least, but Plymouth can hold their heads high for their valiant effort in Sunday’s Trophy final defeat. Paul James’ side had been 16 down at half-time before battling back to set up an exciting finish, though they could never quite move ahead in the contest.

Rickey McGill continues to fire on all cylinders and poured in 31 points to keep the Raiders competitive to follow up scintillating displays in the semi-finals. The momentum push for the playoffs begins with games against Sheffield and Manchester this week with it being paramount not to dwell on the final loss.

A big week for the Phoenix. In the midst of an impressive run in the league, they face Leicester on the road o Wednesday before hosting Newcastle on Sunday with the chance to climb even higher in the current standings.

Another league defeat for the Eagles as they went down by four points on the road against Surrey. Cortez Edwards and Rahmon Fletcher combined for 50 points in a losing effort with Newcastle now looking closely over their shoulder in regards to their league positioning with three sides within striking distance.

The Cup winners had been nine points behind at half-time, but battled back – taking a one-point lead inside the final quarter at 81-82. However, the home side were able to close out a vital victory as Newcastle now head into a big week as they take on both London and Cheshire.

A weekend off for the Sharks after splitting their double-header at home last time out. Atiba Lyons’ side won’t be back at Ponds Forge until 9th April with their next game on the road against Plymouth this weekend.

Worcester avenged their recent loss to Glasgow with a comfortable 19-point success at home to move to 10 league wins from 20 games played as they reached the two-thirds mark of their campaign.

Matt Newby’s side outscored the Rocks by 17 points through the middle periods to take control of the contest. Brandon Anderson fired in 26 points along with seven rebounds and five assists in the win, which keeps the Wolves ahead in the playoffs race with the teams below them also victorious.

Bristol hold onto the coveted eighth spot as they were given a major scare at home to Glasgow. They had led by as many as 13 before being taken to overtime, and Andreas Kapoulas’ side recovered from four points down with a decisive 13-1 run to take the victory.

Justin Baker led the way with 23 points as one of five players with 10+ points as the Flyers welcomed back Raphell Thomas-Edwards and Ben Mockford, though Daniel Edozie remained out. Bristol are a game ahead of ninth-placed Surrey with 12 games left each – they face seventh-placed Worcester on Friday night.

It took five minutes of overtime to separate Bristol Flyers and @rocksglasgow on Saturday night.

After missing out on a place in the Trophy final, the Scorchers reverted their attentions to the battle for the playoffs and boosted their chances with an impressive home win over Newcastle – having also pushed the league-leading Riders close in midweek.

Connor Cashaw had a huge game with 19 points, 17 rebounds and seven assists in the three-point loss as the visitors remained competitive. They announced the departure of Ryan Richards prior to their encounter with the Eagles, but the squad stepped up in a big four-point victory on Saturday with four starters in double figures.

No game this past weekend for the Giants, which may have come at an opportune moment with new head coach Lloyd Gardner able to have extra time to work with his squad in preparation for a strong finish to the season. Three games await this week, though, as they host Worcester and Plymouth either side of a trip to face Glasgow.

Having beaten Worcester last time out, the Rocks would have had renewed hope of making a charge towards the playoffs. However, successive defeats on the road see them fall further adrift with their 3-16 record as they remain at the bottom of the standings.

They came unstuck in the middle periods at Worcester in a repeat clash as they fell to a 19-point loss, but a fourth quarter fightback in Bristol saw them force overtime. Christian Keeling had 28 points and 11 rebounds with the Rocks outscored 16-9 in the extra period. They host Surrey and Manchester in must-win clashes.