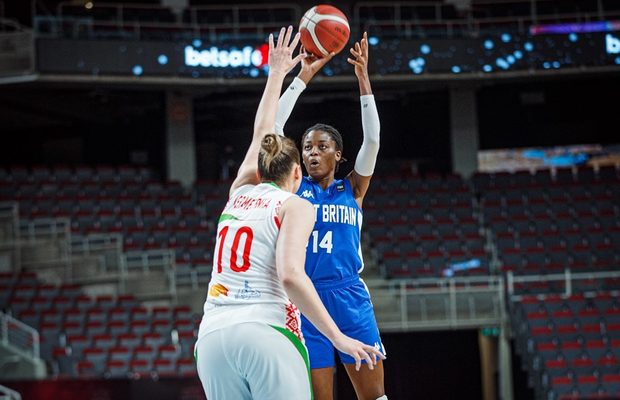 Great Britain’s Senior Women face a nervous wait to decide their FIBA Women’s EuroBasket 2021 fate after they fell to an agonising 67-57 loss to Belarus in Riga, on Thursday.

Chema Buceta’s side finish the group with a 2-2 record and must now rely on other results going their way if they are to make a fifth consecutive trip to the major tournament.

Temi Fagbenle put on another impressive display for GB with a game-high 23 points along with 13 rebounds and two blocks, while Karlie Samuelson added 12 points on her return.

GB immediately went inside with Fagbenle finding early success for the opening score before knocking down successive trademark mid-range jumpers. Chantel Charles marked her GB return with a score off the bench with GB continuing to ride with Fagbenle, who moved into double figures with a determined drive and left-handed finish. However, it was Belarus who edged a low-scoring opening quarter to claim a slender 14-12 advantage.

GB made an aggressive start to the second, including Renee Busch drawing a charge as Belarus found themselves in the penalty inside two minutes. Cheridene Green’s offensive putback from a missed free throw put GB back ahead at 17-16, though their opponents would hit back with a quick fire 5-0 response.

Samuelson knocked down a wide-open three – GB’s first of the game – in a run of five straight points to spark a 7-0 spell as the lead continued to change hands. Belarus hit their third three of the game – two more than they managed against Poland – and moved 34-33 ahead at the half-time buzzer with GB shooting less than 30% from the field, though they did capitalise on numerous trips to the foul line – going 13-of-14 in the half.

Fagbenle started the second half with a three-point play to move to 15 points, while Eilidh Simpson continued to have a major influence on the game, beyond the box score – particularly on the defensive end. GB’s lead peaked at five points, but neither side were able to assert their control on the absorbing contest.

Once again, Belarus connected at the buzzer to end the quarter as they re-gained their slender advantage to lead 52-51 ahead of a crucial final 10 minutes. They continued the momentum at the start of the fourth by extending the gap to eight points with a 7-0 opening.

GB battled back to close the gap but then a pivotal spell of turnovers leading to threes at the other end proved costly as the deficit hit double figures for the first time. Shots stopped dropping, turnovers continued and the situation became desperate inside four minutes.

– GB’s starters were Simpson, Samuelson, Handy, Fagbenle & Anigwe
– Shequila Joseph made her GB Senior debut, though was a DNP alongside Hannah Robb
– GB have qualified for every EuroBasket since reaching their first in 2011
– Poland beat Belarus 68-56 on Wednesday, and the teams meet again on Saturday