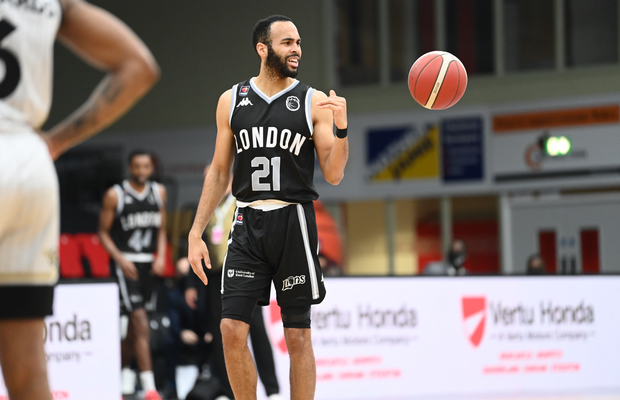 More surprising results were provided around the BBL this past week with home comforts proving extremely rare in the latest round of action.

This week saw Newcastle drop a game as the fierce league battle amongst the top three continues, while Glasgow became the first team through to the last four in the Trophy.

A big weekend for the Lions to get back on track as they advanced to the quarter-finals of the BBL Trophy before avenging their recent loss to Plymouth to avoid falling behind in the Championship.

Josh Ward-Hibbert hit a huge go-ahead corner three to help knock out his former side as the Lions edged out the Riders for a five-point triumph. Dirk Williams then put up 25 points in the road win against the Raiders with DeAndre Liggins also netting 25 points along with five rebounds and six assists.

Who wants to see him in a Lions kit 👀 @LiAngeloBall pic.twitter.com/NGIqGVxL7f

The Riders have established pole position in the Championship standings with just one defeat from their opening 12 games in the league, though they saw any hopes of a run in the Trophy stopped at the first hurdle as they were beaten by the Lions.

Just as it was in the Cup semi-final, it was a five-point loss against a top-three rival in a knockout fixture with Josh Ward-Hibbert coming up huge down the stretch to eliminate his former side. Leicester showed no ill-effect away at Sheffield with a fast start as Darien Nelson-Henry, Geno Crandall and Corey Johnson combined for 62 points as their side racked up 107 in total for a 14-point victory.

As we say every week, there is little to split between the current top three, and despite just a second loss of 2021, the Eagles drop to third spot in our rankings as they suffered a heavy loss at the hands of Sheffield – though they did bounce back to beat Bristol on the road – without Justin Gordon.

It was a rare off-night for Newcastle in going down by 20 against the Sharks with 19 turnovers not helping their cause, while Rahmon Fletcher and Cortez Edwards were both held to single figures. Fletcher responded with a 25-point haul against the Flyers as his side had to battle to secure an eight-point win – as their win tally in the league hit double figures.

Next up, a huge clash away at Leicester before a chance to avenge that loss to Sheffield at the ECA two days later.

A dominant win on the road was followed by a loss against the Lions with Plymouth on a .500 record through 16 league games having played more than any other side so far, as they sit in fourth spot.

The Raiders came out firing in Worcester to build an early 14-point advantage on their way to a convincing victory with Ashley Hamilton and Ricky McGill both netting 22 points apiece. They were unable to replicate their recent performance against London on their home floor as they lost all four quarters in a 17-point loss to curtail their winning run in the league.

A split weekend for the Sharks probably never felt so good. Atiba Lyons’ side enjoyed a 20-point victory in the North-East to halt Newcastle’s charge before coming out second best in a high-scoring encounter at home to Leicester.

Sheffield made a bright start against the Eagles on the road, and broke clear with a 22-9 third period in leading by as many as 22 with five players in double figures. Antwon Lillard and Jeremy Hemsely combined for 44 points against the Riders, but despite the improved scoring output, the Sharks could not contain the Riders at the other end in giving up 107 in defeat.

Worcester had an eventful week with three games in four days, and should be quite pleased to come out with two victories from that spell, though they did endure another heavy loss at the hands of Plymouth as they were unable to recover from a 13-27 opening period.

Maarten Bouwknecht hit back-to-back triples in the clutch to help secure a six-point win in the Trophy, while Brandon Anderson scored 15 straight points for his side to haul his side ahead at 74-75 in the final minute before icing the win, having been 70-62 behind to bounce back from the Raiders loss.

Manchester still find themselves in a tough spot right now as they’ve gone from sitting relatively comfortably amongst the top four to now occupying eighth place and embroiled in the playoffs battle.

The Giants saw their losing run continue in the Trophy as they went down in a high-scoring clash with Worcester, despite 25 points from Jordan Whelan. It was then a fifth consecutive league defeat on Sky Sports on Friday night as their hot start cooled into a seven-point loss to Surrey with the Wolves up next again in the league.

Two double-digit leads at half-time for the Phoenix over the weekend: the first needed an incredible game-winner from Mike McCall at the buzzer, the other ended in a five-point loss at home to end their Trophy hopes in the quarter-finals.

McCall finished with a game-high 23 points to lift his side to an important road win in Bristol in the league with Pharroh Gordon adding 10-12-5 for the visitors. On Sunday, Cheshire welcomed back Jimbo Lull with the American big putting a team best of 20 points from the bench, but they were left to rue a costly third period to exit the competition.

Almost the perfect weekend for the Scorchers. After an impressive road win on Sky Sports against Manchester, Creon Raftopoulos’ side led Worcester by nine inside the final five minutes before falling to a crushing two-point defeat.

Tony Hicks netted 20 points in the win against the Giants with valuable contributions off the bench from Ryan Richards, Caylin Raftopoulos and Cameron Hildreth, who had 17 points along with five assists. They also had a double-double from Lacey James on home debut against the Wolves with Surrey remaining amongst the bottom two in the Championship standings.

Tough, tough loss for the Flyers – they were on the wrong end of McCall’s moment of magic at the death before seeing one home loss turn into two as they were beaten by Newcastle two days later, despite 21 points and 12 rebounds from Marcus Delpeche.

It was his second double-double of the weekend after finishing with 13 & 19 against Cheshire with GB guard Ben Mockford top scoring with 19 points, including a go-ahead three late on which looked to have given the Flyers the win. The Flyers have now lost six of their last seven in the league and close out February with games against Surrey and Manchester after the international window.

Glasgow may be at the bottom of the league table, but now find themselves with a semi-final to look forward to, after overcoming Cheshire on the road for a five-point triumph in the Trophy. Christian Keeling led the way with 19 points and 10 rebounds in the win with Ronald Delph adding 15 points including a key late score.

The Rocks had been down 10 at the half-time break, but turned things around with a pivotal 23-9 third period to take charge of the contest. No action this coming week for Gareth Murray’s side before they close out the month with a double-header against Plymouth as they aim to ignite their playoffs charge.

Thanks to @CWASportMedia for the ✍️ & Adam Day for the 📸 pic.twitter.com/kQlaEsc7Y7