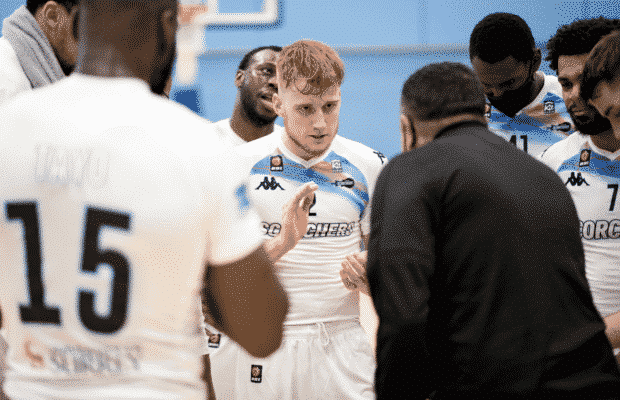 An action-packed weekend of league action saw the limelight stolen by a thriller in the Trophy as a teenage sensation helped avoid an upset on BBL debut.

Another win for the soaring Eagles and the Cup champs take top spot in our rankings as the Lions dropped their second league game. Newcastle impressed again in a nine-point win over Worcester and are now just a win behind new leaders, Leicester, in the Championship race – with a long way still to go.

Cup final MVP Justin Gordon continues to dominate having put up 22 points and 14 rebounds, while Rahmon Fletcher contributed 13 points and 14 assists to add further weight behind his case for a third league MVP honour. The Eagles take on Sheffield and Bristol in a double-header with the chance to maintain their winning run.

The Riders continue to go quietly about their business in accumulating wins, as a weekend double put them to the top of the Championship standings – and are also on their own in the fewest losses column – having won seven straight since defeat to London.

Geno Crandall came up clutch again in an overtime thriller against Manchester, finishing with 26 points and 15 assists, no less, while Corey Johnson hit seven threes in his 24 points. The Riders then eased past Glasgow for success on the road with another 22 points from Crandall.

As previously said, there is little to separate the top three teams and could be inter-changeable most weeks, so it’s not as dramatic a drop to third as it appears for the Lions after they were beaten at home at the weekend – with two thirds of their league schedule remaining.

It was their first game since the Cup final against an in-form Plymouth side and were left chasing the game after a 13-22 second period. DeAndre Liggins was back in action and was an assist shy of a triple-double with 12-12-9, while Fahro Alihodzic found early joy in his 13 points. Riders await in the Trophy on Thursday before the Lions take on Plymouth on the road this time, on Sunday.

Big, big weekend for the Raiders. Paul James’ side enjoyed a comfortable win against South-West rivals Bristol on Sky Sports before toppling the league-leading Lions on the road two days later. Plymouth are looking a dangerous side again having seemingly recovered from a run of seven league defeats in eight.

Ashley Hamilton led the way with 19 points against the Flyers with Denzel Ubiaro making his mark again with 14 points. Against London, Hamilton had 20 points to lead all scorers with Mike Morsell and Ricky McGill adding 15 points apiece to make it four straight wins in the league.

The Sharks continue to blow hot and cold this season as they enjoyed a double-winning weekend to climb up to fifth in the league standings. Sheffield overcame a slow start to avenge a previous loss to Glasgow before racing out of the blocks to set the tone in their road win at Manchester.

Antwon Lillard led the way against the Rocks with 21 points, 11 rebounds and four assists as the defence dominated the second half, while Jeremy Hemsley fired in 26 points in the 14-point win on Sunday with Jordan Ratinho and Lillard weighing in with a further 38 points. A tough weekend follows with encounters against the league’s top two sides.

The Giants have hit a bit of a bump in the road. They had to deal with COVID issues that derailed their Cup charge and are now on a four-game losing run in the league, with Lyle Hexom also departing this week for ‘personal reasons’.

Manchester still came close to beating Leicester on the road as they eventually came up short in overtime, despite 30 from Jordan Whelan and Breaon Brady with 29 points and 14 rebounds. The effects seemed to linger with the Giants down 15 after one at home to Sheffield as they fell to a double-digit defeat to drop to a 5-7 record after such a bright start.

Worcester returned to action with a nine-point defeat away at Newcastle as the first quarter deficit transpired into the final margin. Jordan Williams put up 18 points and 12 rebounds with Brandon Anderson netting 17 points as they failed to stop the high-flying Eagles, who enjoyed an efficient 61% shooting from inside the arc.

Some mid-week action for the Wolves as they welcome Manchester in a re-arranged fixture and Matt Newby’s side are just a win behind with three games in hand so victory could give them a big advantage in the battle for league positioning.

Perhaps a harsh drop for the Phoenix given they were not in league action, but still picked up a win on the weekend – as Sheffield climbed. Ben Thomas’ side began their Trophy campaign with minimal fuss in brushing aside D1 opposition in Hemel Storm as Matthew Bryan-Amaning made his debut.

MBA put up 10 points and seven rebounds in 18 minutes from the bench, while Jalen Hayes led the way with 23 points and 14 rebounds with Kahron Ross handing out nine assists to go with 15 points. The focus switches back to league action with a crunch clash away at Bristol before hosting Glasgow with a chance to distance themselves from teams with playoff hopes of their own.

Not for the first time this season, it was a mixed weekend for the Flyers. They quickly responded from a 22-point defeat in a derby clash on Sky Sports to pull out a three-point win on the road at Surrey to join Cheshire on a 4-7 record for a share of eighth spot in the league.

Bristol conceded exactly 87 points in each game on the road, but their offence stepped up against the Scorchers with Justin Baker’s 17 points leading six players in double figures – including Ben Mockford, who hit four of the 11 triples in the win. Next up, they welcome Cheshire in a big game.

Killa. Cam. If you weren’t already believing the hype, you should be now. A dream debut for the Wake Forest commit with 22 points, five rebounds, four assists – AND the game-winner as Surrey pulled off the escape in the Trophy against D1 opponents, Thames Valley Cavaliers.

The Scorchers erased a five-point deficit inside the final minute to advance, but there were to be no such heroics in league play as they suffered a three-point loss at home to Bristol less than 24 hours later. Tony Hicks had a 24-6-6 line in defeat with Creon Raftopoulos’ side two wins adrift in the race for the playoffs, albeit with two games in hand.

Glasgow had looked on course for a second win against Sheffield this season with an eight-point lead at half-time before being held to just 21 points in the second half as they fell to defeat. They never led beyond the opening score at home to Leicester in a comprehensive defeat to remain rooted to the bottom of the standings.

Americans Christian Keeling and Ronald Delph had 14 points each in the loss to the Sharks, while they were two of four players in double figures in the 19-point loss on Sunday. However, the basketball was the insignificant talking point from the past week as the club revealed how its players were subjected to vile racist abuse earlier in the season – with the story featured in the national media.