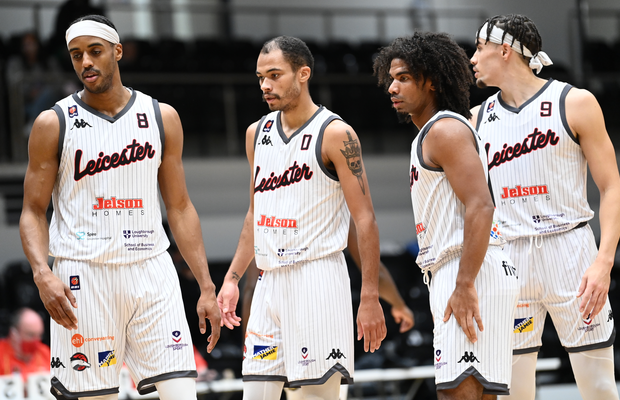 A full weekend schedule completed and each of the 11 sides have now all played at least one official game this season.

Three weekends in the books and only Plymouth, Manchester and Glasgow are yet to suffer defeat, but there’s still a lot of figuring out to do over the coming weeks.

‘The reverse trip to the North-East on Friday will provide a good early gauge of where they’re at and how they can respond.’

Respond they did. An excellent weekend for the Riders as they not only handed Newcastle their first loss, but they did a great job shutting down the Lions to surge to the top of the group standings, and our rankings.

Geno Crandall and Zach Jackson combined for 39 in the win on the road against the Eagles with Darien Nelson-Henry matching up well with the opposing bigs. They then jumped out to a 26-11 start against London with the gap peaking at 27 points with GB guard Conner Washington netting 20 points from the bench.

The win was marred by another injury to Mo Walker after only two minutes of action and the Riders’ depth will be tested in a double-header on the road, including a first meeting with the Sharks as they could lock up top spot.

Bang bang. While their opening win at South-West rivals Bristol was an attritional affair, there was no let up from the Raiders in their first home game as they brushed aside the challenge of a weary Worcester side.

Returning star Will Neighbour had 18 points with more three-pointers than the Flyers combined, while GB’s Ashley Hamilton led the charge on Sunday with an all-round display to finish with 21-6-5 as the Raiders showed their potential, even without another GB international in Andrew Lawrence, who missed both games.

Paul James’ side have grabbed control of the group and could lock up their quarter-final spot with another derby win against Bristol when they meet on Wednesday.

Nice win tonight, we have a long way to go in the way we really want to play, especially me but we are taking it one day at a time. Been a crazy preseason between government restrictions n COVID but we’re getting there https://t.co/gxdR5yqgeS

The first setback in the loss column for the Eagles, though it was a game they would feel they could/should have won. A three-minute spell without scoring down the stretch proved crucial as they suffered a six-point reverse against Leicester, wiping out their winning margin from a week ago in the head-to-head stakes.

Rex Pflueger had 21-8-5 in defeat, but has caught the eye of the GB Senior selectors with his first call-up announced earlier today. There’s a lot to like about this Newcastle team and they have the chance to get right back on track on a rare Tuesday night of hoops.

How are the Lions fourth with a 1-3 record? Fair point. But would they be 1-3 in either of the two other groups? Probably not. It’s not been the expected start, but you still imagine they’ll have things more figured out by the time the regular season begins.

The first real signs of life came on Friday night as DeAndre Liggins lit up the empty Copper Box with a 32-point haul including seven triples to spark a first victory on the season. Justin Robinson set the tone early, while Kevin Ware was full of energy off the bench and it looked like this may be a pivotal moment for the capital side.

However, they got off to a slow start away at the Riders and never recovered as they fell to a 21-point loss to leave them bottom of the group in the Cup. The Lions were being tipped for a sweep of the silverware on offer in some quarters, but now face a huge double-header next weekend to conclude their set of fixtures.

The Sharks would have been wary of a strong response from the Lions at the Copper Box, and they got it. Atiba Lyons’ side could not contain Liggins nor match the efficiency of their back-court in general with Robinson, Ware and Andre Lockhart impressing.

Sheffield had quietly got back into the game having been down 21, but Nick Lewis was held scoreless and they lacked a consistent scoring threat, despite their successes inside. I’m sure they would have probably taken a 1-1 start – although they have lost the H2H – and will now come up against Newcastle and Leicester this week.

Double-headers are tough. One night, you pull off a thrilling one-point home victory and the next, a deflating 30+ point defeat on the road. Try to assess that. In the standings, that’s 1-1, but the points difference has taken an early hit.

Josh McSwiggan was not hanging around against Surrey with 16 of his game-high 22 points in the first quarter with Jordan Williams putting up a strong double-double as the Wolves made do without their American contingent. They had bolstered their roster with the addition of MBA on Friday, but found things much tougher away at Plymouth and were held to 60 points as their lack of depth showed.

Surrey found themselves down by as many as 14 in their first official contest, but hauled themselves back into contention before being on the wrong end of a controversial late call and losing by a single point.

The Scorchers had five players in double figures with Connor Cashaw nearly posting a triple-double on debut with a 12-9-10 stat-line with Tayo Ogedengbe and Skyler White with 17 points apiece. Early signs their struggles on the road might not continue this season, but they have a tricky double-header with Plymouth to contend with next.

Cant get a cleaner steal than that one 🤔 pic.twitter.com/oIBB1lkwCw

The controversial ending of @BBLWolves v @surreyscorchers as Worcester escape with a win following a foul call in the dying seconds. 👀

What do you think? #BritishBasketball

No official action for the Giants this past weekend, but they ‘will’ be back on the court ahead of next weekend as they host Cheshire on Thursday. Lyle Hexom poured in 28 points in a friendly contest with Bradford Dragons, though no update has been provided on the status of their Americans in terms of availability.

Gareth Murray now has a 100% record in his young coaching career with the Rocks. No doubt, their chances were boosted because of their depleted opponents, but it was still an impressive display from a young roster that doesn’t include any Americans anyway.

Marc Kwedi fired in 26 points along with six rebounds and five assists, while there were double-doubles for Boban Jacdonmi on pro debut and Julius Van Sauers, who made a summer switch from Worcester. A positive start for the Rocks to build upon ahead of the next meeting with Cheshire, on Sunday.

To God be the glory. I just finished my first ever professional basketball game and got the dub! Couldn’t be more proud of my team #makesomenoise @RocksNews_ @rocksglasgow

Bristol finally took to the court on Friday night, but it wasn’t a game to remember. The Flyers’ outside shooting never took off – going 2-of-22 – and they fell away in the second half to slump to a 15-point loss at home to Plymouth.

Already up against it in terms of qualification, Andreas Kapoulas’ side have little room for error in their remaining games but signs of progress and improvement will perhaps be more encouraging at this stage of the season. A midweek reverse in the Derby provides that next opportunity.

‘Coronavirus implications’ struck the Phoenix this week. All five imports plus Pharroh Gordon were sidelined for their trip to Glasgow and an inexperienced roster went down by 30 points as Cheshire dropped to 0-2.

Sol Rolls-Tyson top scored with 18 points in the loss, albeit one more difficult to judge than usual considering the circumstances. The chance to bounce back from their opening defeat to Manchester may well be hampered, though of course the Giants were depleted in that first encounter.