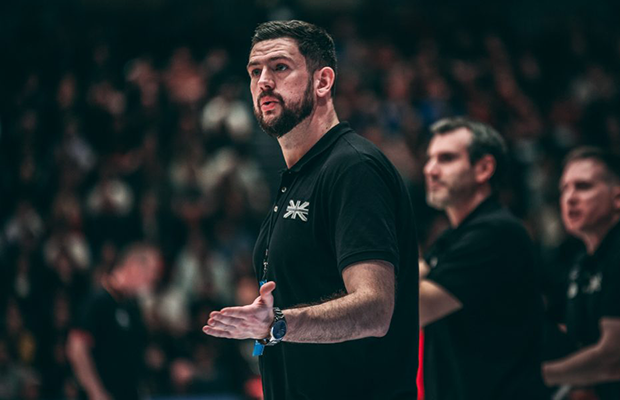 Great Britain assistant Marc Steutel will be returning to the national league after signing with Division 3 side Teesside Lions.

Having taken the helm of the GB Senior Men during their most recent window with Head Coach Nate Reinking unavailable, the three-time NBL Coach of the Year returns to the national league for the first time since the folding of former club Northumbria in 2018.

Teeside, who average around 500 fans in attendance at their games in D3, are directed by former head coach James Thomson and local businessman Martin Anderson.

“Firstly I would like to thank James and Martin for this opportunity,” Steutel said.

“They have shown me an ambitious, yet credible and achievable vision and it is genuinely exciting for me.

“I have known James and his abilities in basketball for many years and the meteoric strides Lions have made in just a short year are incredible. To attract crowds of 500 is yet another indication of something special happening at the club.

“The ambitions of James and Martin align with my own and I am looking forward to working with them. I am excited about the project, helping to develop the club and ultimately producing an exciting and successful brand of basketball here on Teesside.”

Steutel, widely regarded as one of the UK’s brightest coaching minds, won five national titles with Northumbria, and helped the GB Under-20s to their highest ever finish at the European Championships in 2018.

Club Chief James Thomson effectively sacked himself in the move to appoint Coach Steutel, but is excited about the future of the club and appointment of Marc, adding:

“Marc is one of the most highly rated coaches in Europe. I enjoy coaching and will still play an active role in the coaching team with Marc, but this presents an incredible opportunity for the club and I am genuinely excited about where we are headed.

“It is an incredible pleasure to bring Marc to Teesside and this is just the beginning of an ambitious project.

“Last year we announced plans to bring professional basketball to the area, last season we developed a great event and attracted attendances of 500 and now we are unveiling the GB Coach as the new Teesside Lions Head Coach in spite of the Covid_19 pandemic.

“We want to show people that we are working hard behind the scenes to ensure when basketball returns we will be bigger and better than ever before. This appointment is the exclamation mark of that statement.”