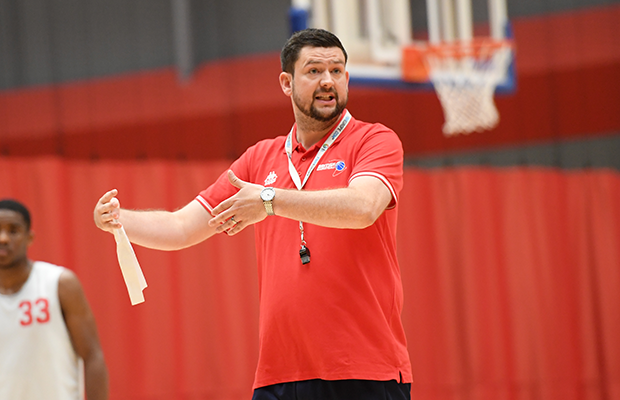 Marc Steutel has had to step in to take over the reins of the Great Britain Senior Men during the February EuroBasket qualifying window, after the British Basketball Federation (BBF) became aware late Nate Reinking will be unavailable due to club commitments.

With a little over a week until training camp, Steutel will be assisted by Andreas Kapoulas, and Jamie Smith as officially confirmed by the BBF on Monday. It is understood awareness that the Canton Charge’s Reinking would be 100% unavailable only came in late January, with just a few weeks remaining before the opening of training camp.

The BBF board – spearheaded on the performance side by Toni Minichiello – seems set on retaining Nate Reinking as Head Coach for the foreseeable future, sources close to the organisation say he was given a six-year contract last year; though this remains unconfirmed.

The decision on a long-term contract would be a curious one with the board knowing his availability is club release-dependent – in theory, he would be available for the EuroBasket 2021 final round next summer should GB qualify, but otherwise will be in-season during the windows.

The BBF did not respond for request to comment, and Minichiello turned down a Hoopsfix request for an interview. However, in the BBF statement released on Monday he said the following:

“We have known since before Nate coached his first game for us that there would be periods when he may be unavailable because of his G-League commitments.

“The critical thing is to build trust, continuity and a way of playing that makes best use of the players we have, in our pursuit of EuroBasket qualification and success.

“Marc Steutel and Jamie Smith provide the valuable continuity with the brilliant unbeaten start Nate has made with the team. It’s important we build with British coaches and, in Andreas, we are also delighted to be able to add someone of real pedigree and experience.

“This is about building for the long-term with Nate as the driving force of this cultural change with a talented, experienced group in place around him.”

Steutel was a natural choice for the role due to knowing Reinking’s system; which he is allegedly expected to implement, while Hoopsfix understands it remains Reinking selecting the roster

However, it was known at the time that Reinking – who was only available for the August window by chance due to being in the country on a family holiday – could only commit to future windows should the Canton Charge release him; a risk the previous BBF regime were not willing to take when considering hiring him due to the unlikelihood of it happening.