Ben Mockford continues to give his all for the GB jersey - Hoopsfix.com

Ben Mockford continues to give his all for the GB jersey 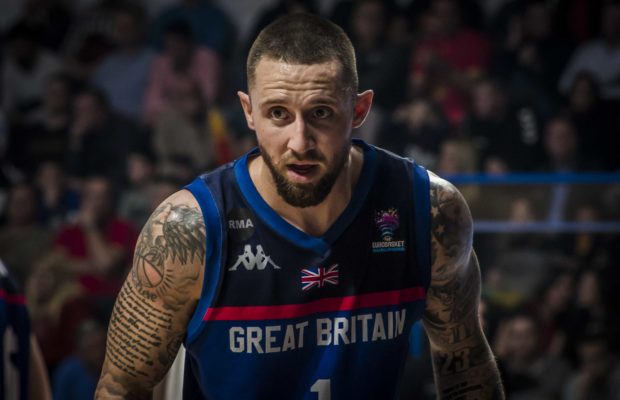 Ben Mockford was enjoying one of the most productive years of his pro career before seeing his first full season in the BBL cut short.

It’s not just basketball that is on hold for the Brighton native, but life, too. Plans to get married in North Carolina in the summer are likely to be postponed, he admits, also remaining wary of the practical challenges of resuming the season.

“These are difficult times for everyone,” he said in an interview with Hoopsfix. “It’s important for everyone to stay healthy and stay safe.

“I’m doing workouts at home, staying active but, with everywhere shut down, it’s difficult to do much other than some individual drills. If the season did continue, teams would need quite a few practices to get the rhythm back and even possibly some practice games.”

Mockford’s first stint in the BBL came back in the 2014-15 season when he joined Plymouth Raiders midway through the campaign after taking a short break from the game.

Spells in Spain and Greece have followed before returning home with Cheshire Phoenix – averaging 17.5+ points per game in all competitions, whilst also notably making a decisive impact for Great Britain’s Senior Men. 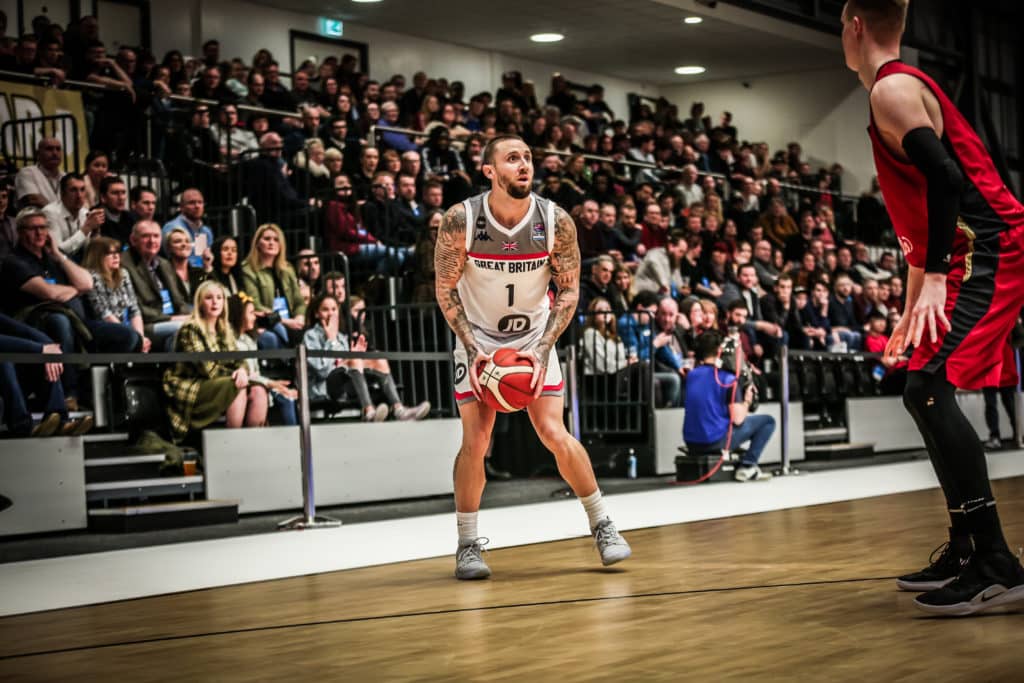 Mockford broke onto the international scene as a teenager in 2008 with his first involvement with GB with the Under-20s. The left-hander dropped 29 points in a win against Ireland at the European Championships before competing in the tournament again, the following summer.

After being part of the GB Futures set-up in 2012, Mockford went on to receive his first call-up to the Senior side two years later.

Nothing compares to donning the jersey of your national team, and regardless of the off-court distractions, the team has relished the opportunity to unify and represent on the court.

“Whenever any of us play for GB, there’s a huge sense of pride,” Mockford enthuses. “We talk about how we wish it could be our team for the season because we just have so much fun on the court.

“Having a similar core group each year with guys that have all played with each other at some point really helps us moving forward.”

Mockford has earned 39 caps for the GB Senior team since making his debut almost six years ago, making an immediate impression with a 19-point outing in Sarajevo as part of the EuroBasket 2015 qualifiers.

The 30-year-old was part of the final 12-man roster at EuroBasket 2017 and returned to the fold in the recent window, reaffirming his commitment to the programme and acting head coach, Marc Steutel.

“When it comes to GB, I said it doesn’t matter whether I play zero minutes or 40, I’m ready to play and give it my all.

“In the years with Joe Prunty of playing one minute a game, I gave everything I had on the bench with my energy, supporting my team-mates and felt like I still had an impact.

“But when my name is called, like the last window, I do whatever is needed on the court.”

Just like the aforementioned performance against Bosnia and Herzegovina, Mockford produced another standout display against Germany with eight points, three assists and two steals in the 81-73 victory.

The St. Francis Brooklyn graduate stepped up in the clutch moments in the fourth quarter with an inspired effort on both ends of the floor, earning the praise from his team-mates – in particular captain Dan Clark in the post-game press conference.

“All the guys know how we feel about each other,” said Mockford. “Dan is one of my guys, I really appreciated his words and there were a lot more away from the microphone, too.

“He’s helped me grow as a player and I can’t speak highly enough of the guys.

“For the average fan, things like that might not stand out but your team-mates know and that’s the most important thing.

“Being a positive team-mate, diving on the floor etc.. those all go a long way in the basketball world.

“Those things get recognised, sometimes more than scoring as every team needs someone that can do that.” 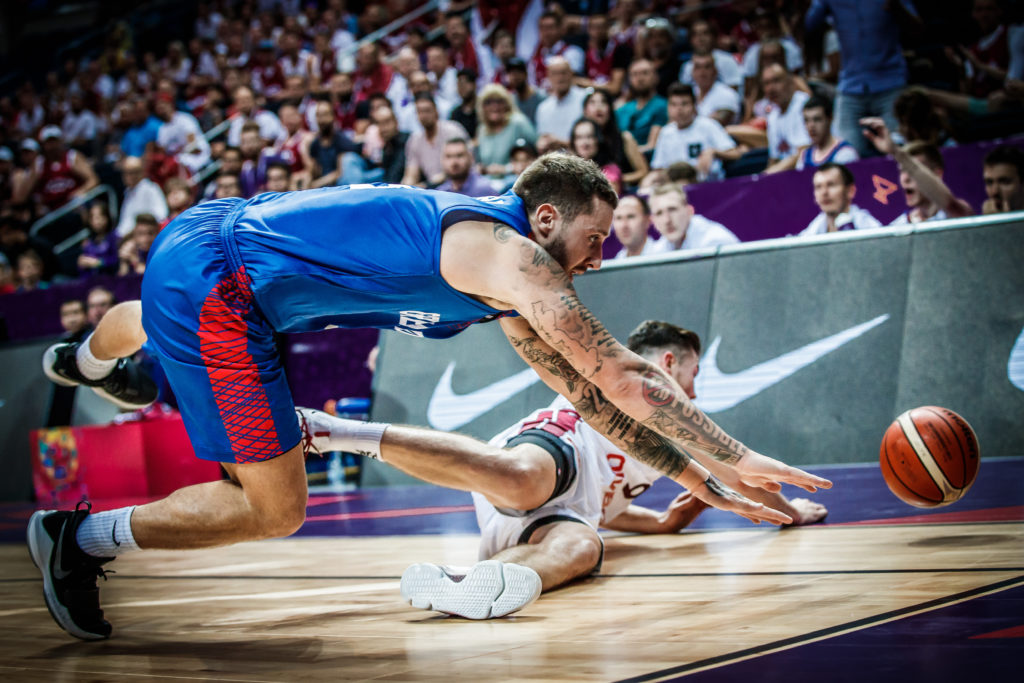 GB were riding the wave of a historic winning streak heading into the EuroBasket 2021 qualifiers, but saw their run come to an end in Podgorica in a tough defeat against Montenegro.

A few days later, the team were back on home soil and it sparked an immediate return to winning ways as GB produced a late flourish to see off Germany at a packed Eagles Community Arena in Newcastle.

“It was huge,” states Mockford. “We felt like we should have got a win in Montenegro as well.

“We spoke about not wanting to always be in the mix, but not winning games.

“Against Germany, we felt we had turned the corner and hopefully can continue winning more games like this.

“We have a really talented team – guys like Myles (Hesson), Gabe (Olaseni), Ovie (Soko) and Luke (Nelson) and so many others.

“Obviously, it was a huge win for us and also the programme. People can say it wasn’t Germany’s strongest team but those guys are playing in top leagues everywhere.”

With four teams all level at 1-1 after the first window, the group is evenly poised ahead of the scheduled window in November. With Germany guaranteed to advance as co-hosts of EuroBasket 2021, GB must avoid finishing bottom with a pivotal window scheduled for November with a double-header at home.

GB would host France three days before the crucial return fixture with Montenegro with points difference likely to play a decisive role. And, Mockford believes the team will be ready.

“We fancy our chances against everyone,” he said. “As long as everyone is healthy – we are getting more experienced every year and getting better together.

“Regardless of how many wins we get, we’ll still be considered underdogs by many.

“We spoke about that in camp and don’t mind playing that role; fighting, being gritty – that’s our identity.

“In the last few years, teams have not been able to take us lightly, and we feel like we can put some fear into some other teams going forward.”

Back in the spotlight of the BBL, Mockford’s form transcended from club duties to international level having enjoyed a solid campaign with Cheshire Phoenix as they reached the semi-finals of the BBL Trophy, and sat just outside of the top four in the league.

Their season was met with adversity; in particular with the loss of captain Momcilo Latinovic to a season-ending injury, while Mockford himself missed a couple of games through illness.

The sharpshooter exploded for a season-high of 31 points in a 95-91 overtime victory against Leicester Riders back in December – and it was that opportunity of having a more prominent role that appealed after a 2018-19 campaign that saw minutes hard to come by.

“Speaking with Cheshire, I felt like it would be a good fit,” he explained. “I weighed up my decisions after a tough year in Greece where I felt I should have played a lot more.

“My body is in really good shape at the moment and I felt great this year.

“With the talent we had, anything was really possible. We had some tough injuries which made it challenging, having seven healthy guys at most games.

“We had a lot of thrilling games, so many were really close – the double overtime win against Glasgow [in the Trophy] stands out.

“But I felt we did as well as we could have done. It was a good year.”

Mockford’s earliest memories of the BBL date back to his youth, attending Worthing/Brighton Bears games, recalling watching the likes of Steve Nelson – father of team-mate Luke Nelson – and Randy Duck.

And, his summer move to Cheshire continued the growing trend of leading GB internationals coming back to play in the BBL.

“Justin started the movement, if you want to call it that, and multiple GB guys have come back. Not only that, but been making a big impact and that’s huge for us.

“There’s definitely more that would come back. There’s just the challenging financial aspect.

“It’s not the same when you go overseas, players want to play at home and I know a lot of guys that would love to come back.”

Mockford has come a long way in his career, from turning heads in Brighton at Under-18 level to branching out in America before pushing on as a pro.

And, while there is no regret for the way things have panned out, there is a sense of ‘what if’ as Mockford admits he would have liked to have honed his craft primarily as a point guard.

“There’s always stuff you can change,” reflects Mockford. “But overall, I feel content with myself and the work that I’ve put in.

“When I was at Oak Hill, Brandon Jennings was there, so I moved to the 2 spot and started getting recruited as a 2.

“Back then, if you could shoot, you were regarded as a 2, whereas now you have point guards that are shooters and the game has changed a lot.”

Mockford is not ruling out remaining in the BBL for the foreseeable future, but could also return to Europe depending on what offers come his way once things settle down.

Whatever happens, when the time comes for Mockford to step onto the court again for GB, he’ll be ready.